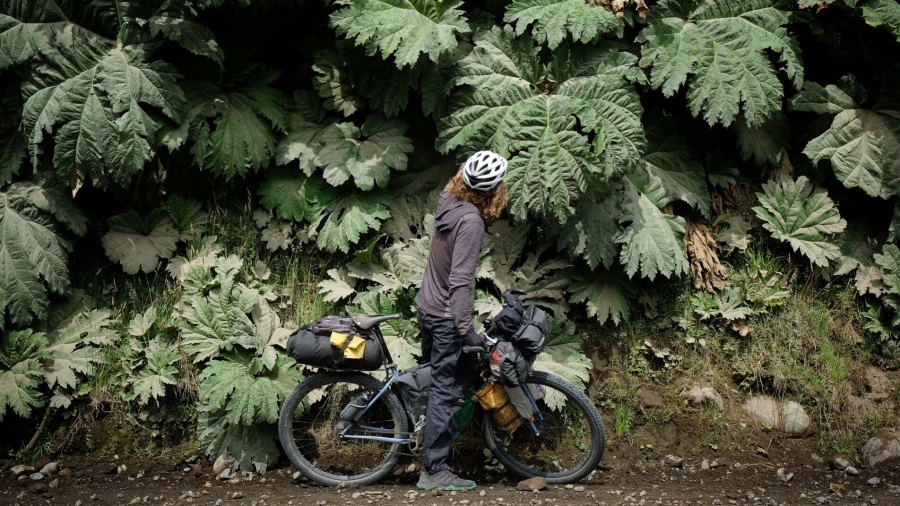 Winding through formerly remote parts of Chilean Patagonia, the Carretera Austral has a reputation bigger than any other road among cyclists and roadtrippers in South America. The project to connect these small and inaccessible communities began in 1976 and the most southern stretch wasn’t completed until 2000. For a few years it must have been a magnificent stretch of isolated dirt road, and no doubt some of its mythology lives on from these times.

We decided to intercept the Austral more than half way down, north of Coyhaique. Just a few days ride from the where the paving ends and what is often said to be the most remote and beautiful stretch begins. Progress here is steady, with constant roadworks inching south. Counter to our dirt-chasing ways, I’m not opposed to it from a cycling perspective. At least not after seeing it in peak tourist season, when the clouds of dust sometimes barely have time to settle.

The landscapes are beautiful, but it’s hard to deny that a route this busy is simply incompatible with finding my idea of cycling nirvana. It felt in many ways like the opposite of our Austral entrance – though still beautiful, it was completely dominated in appearances by spades of personality. I rode along those trails not thinking about dust-eating-avoidance strategies, but simply the thrill, the joy, the exhaustion, the freedom of it all. (And maybe about horse fly avoidance strategies). The point is there’s more to experience than a picture perfect view. A photo may be worth a thousand words, but the vibe not captured in the viewfinder is worth many more. The point of chasing dirt roads, of course, was never the dirt but the solitude they are often synonymous with.

Attempting to embrace the popularity of the route, we had long envisaged our Austral stint to involve syncing up with some people and riding in a big old happy bike gang. We were excited by the prospect. Sadly things didn’t quite pan out that way, as most of the people we met quickly leapfrogged past when we stopped to explore a hike or a detour. The Carretera Austral was pleasant enough, but in the end the real magic was found around the edges – Hiking Cerro Castillo, one way roads and smaller alternative roads, the last 100km of the Austral’s dead end where the cars don’t bother to go, and the wonderful border crossing to El Chalten. 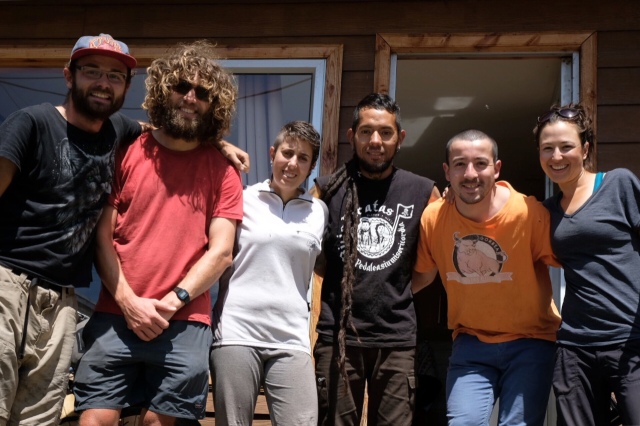 Charles, Andy, Maria, Ulysses, Nico and Eileen at Nico’s place in Coyhaique. Nico hosted us all in his tiny apartment through Warmshowers. Having joined it only a month or two previously, he’s hosted a constant stream of cyclists since. So many, in fact, that the police came knocking while we were there, suspecting him of running an illegal hotel. We walked out to run some errands while they were talking to the others. When they realised this they drove around town looking for us, irately dragging us out of a bank and demanding our passports and to know why we had disrespected them. 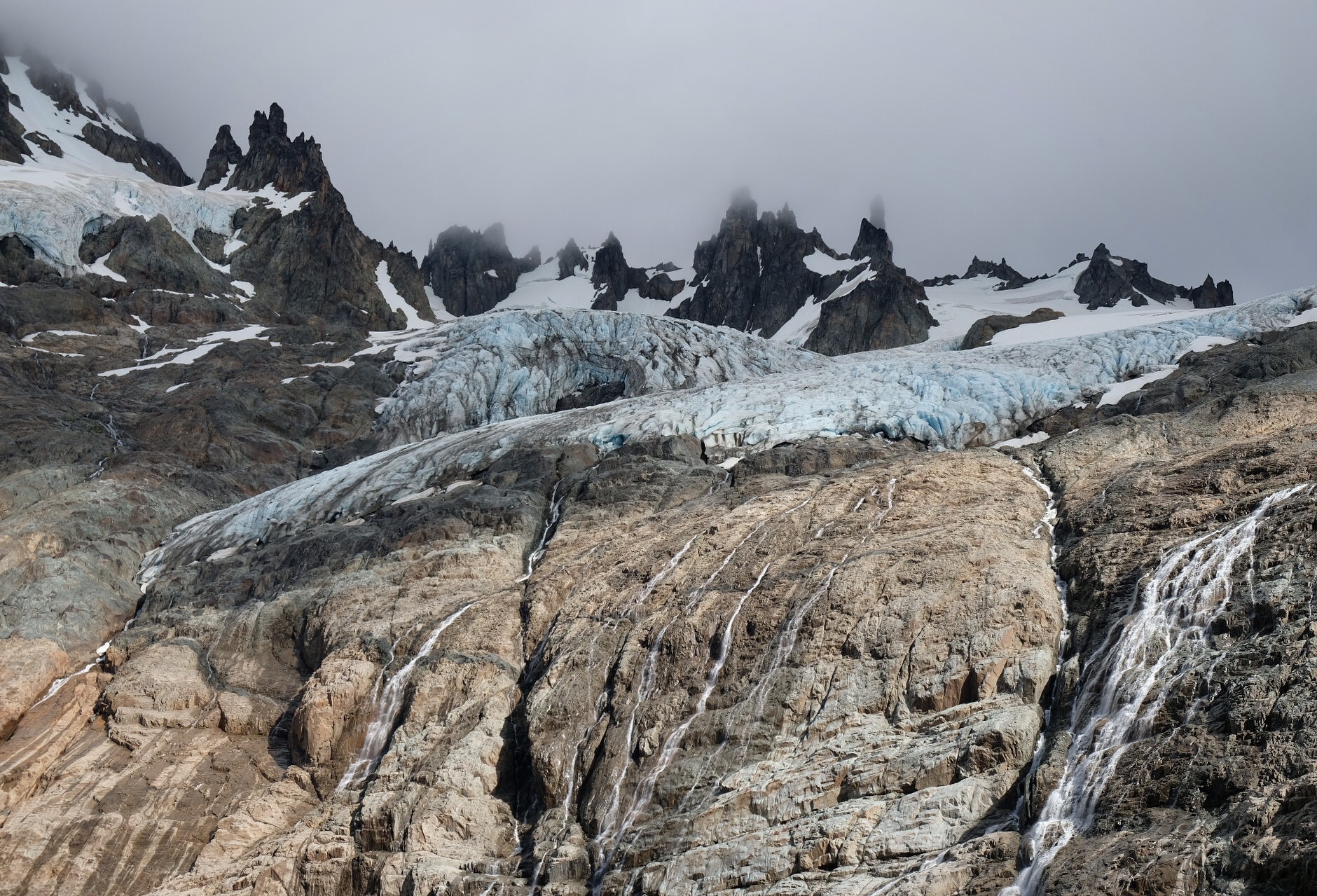 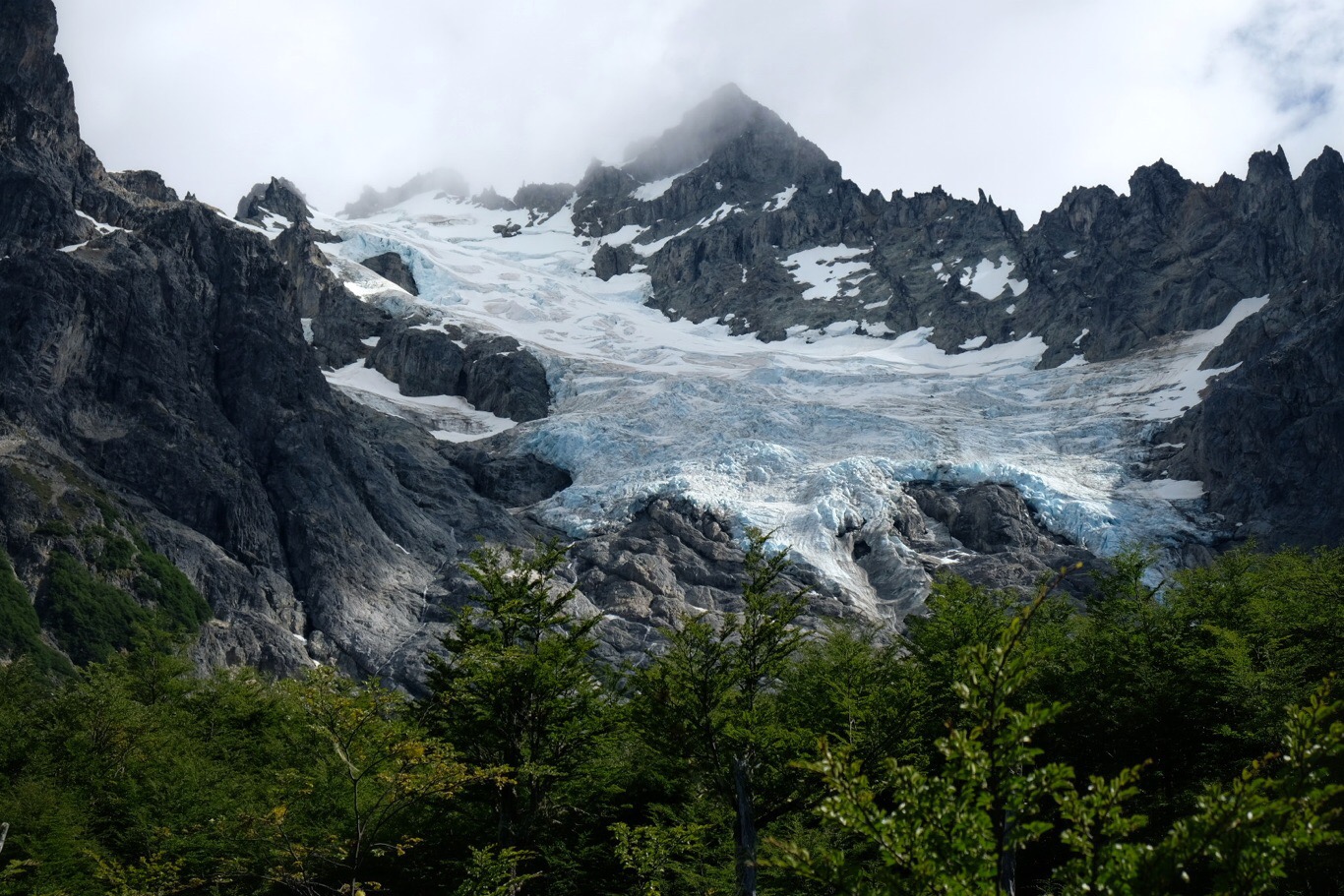 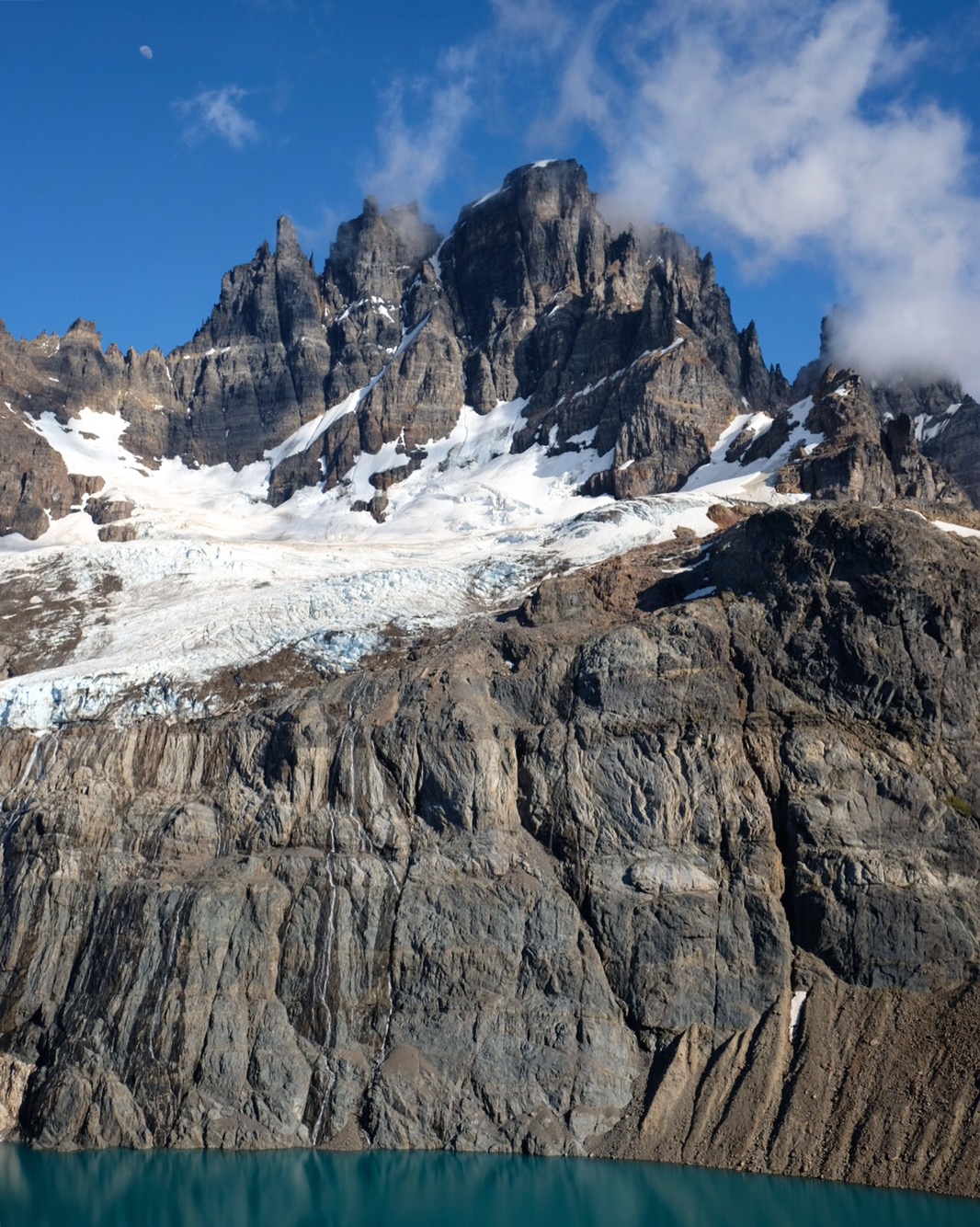 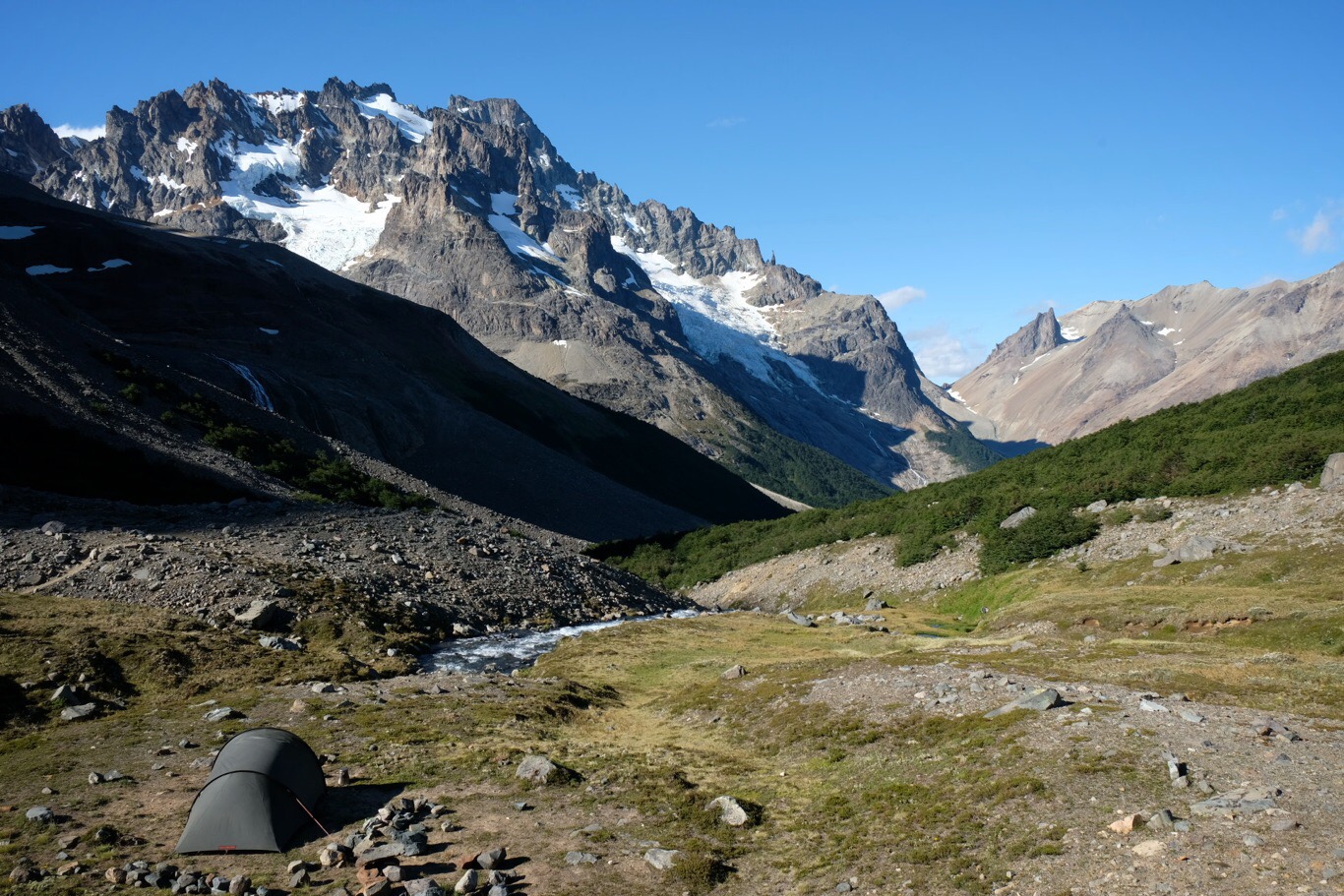 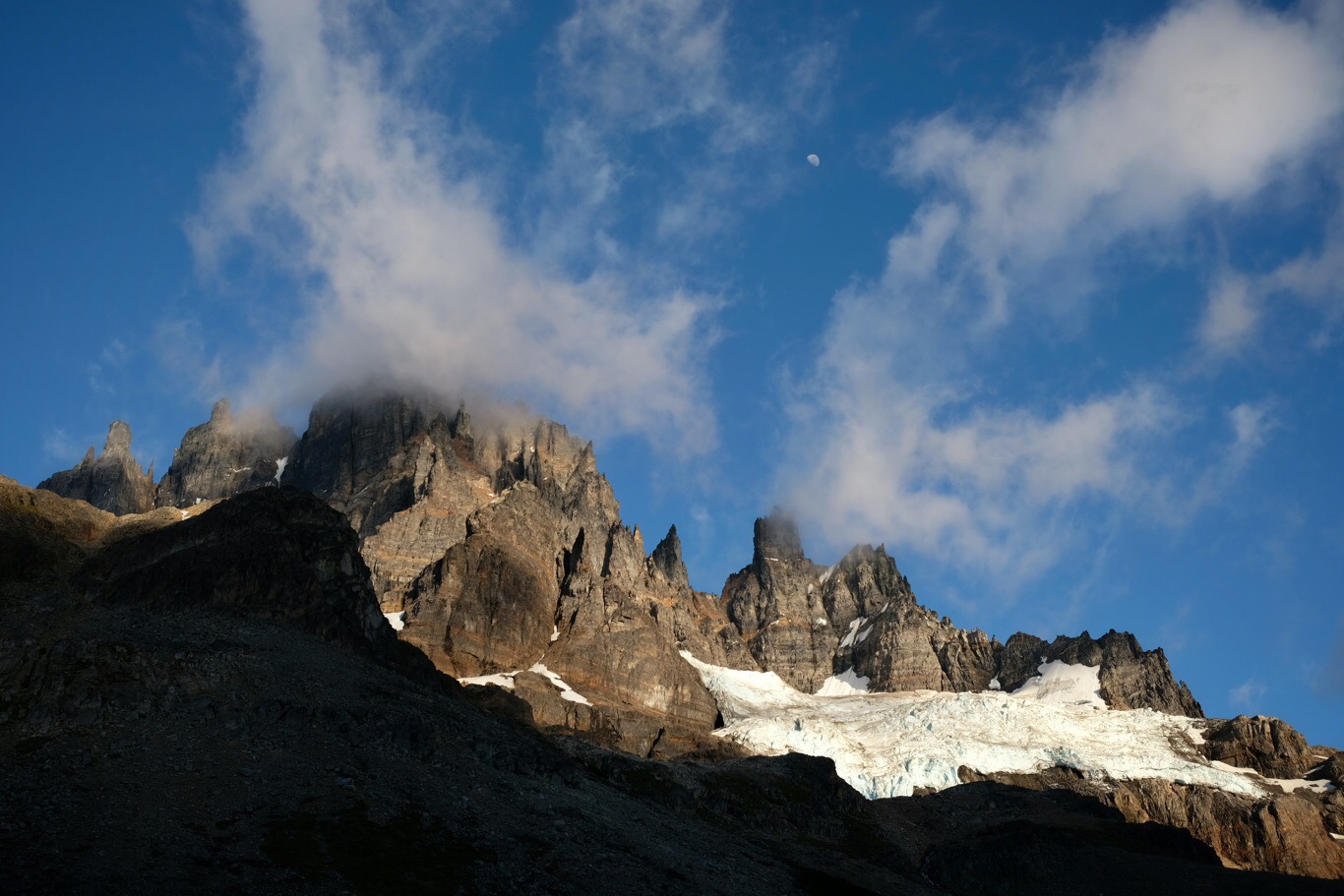 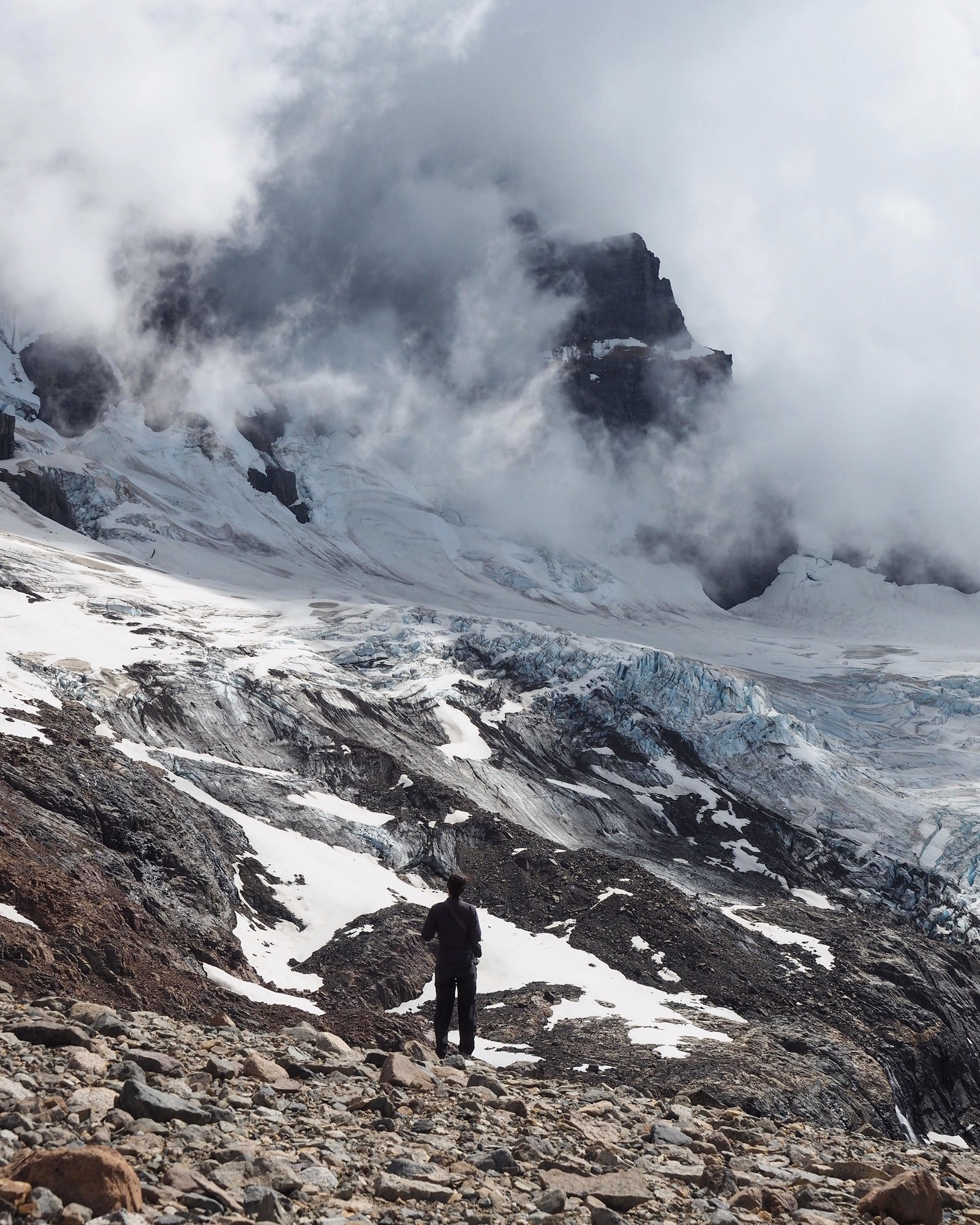 A fantastic four day hike around the Cerro Castillo circuit felt like the introduction to textbook Patagonia with plenty of glaciers, lakes and waterfalls 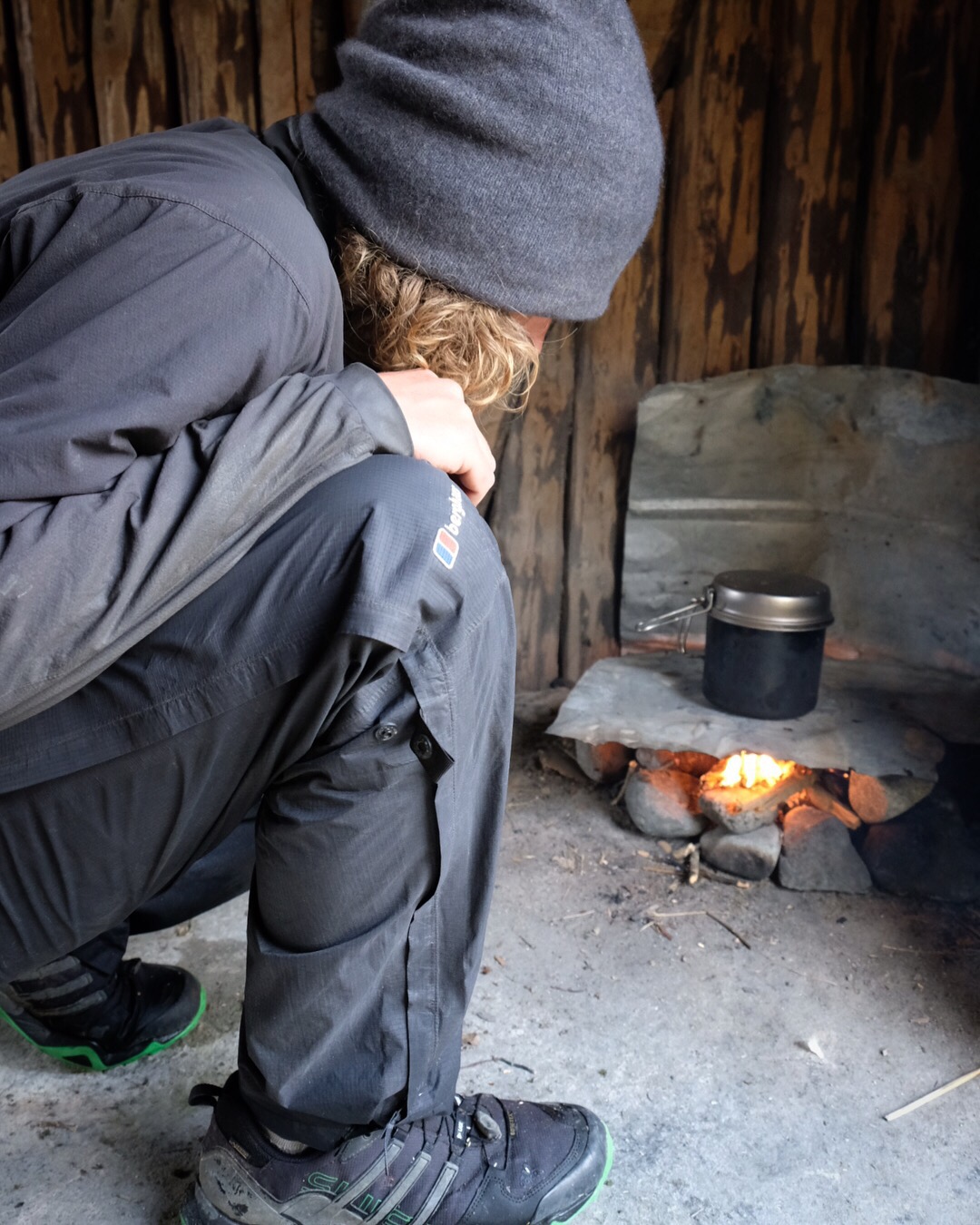 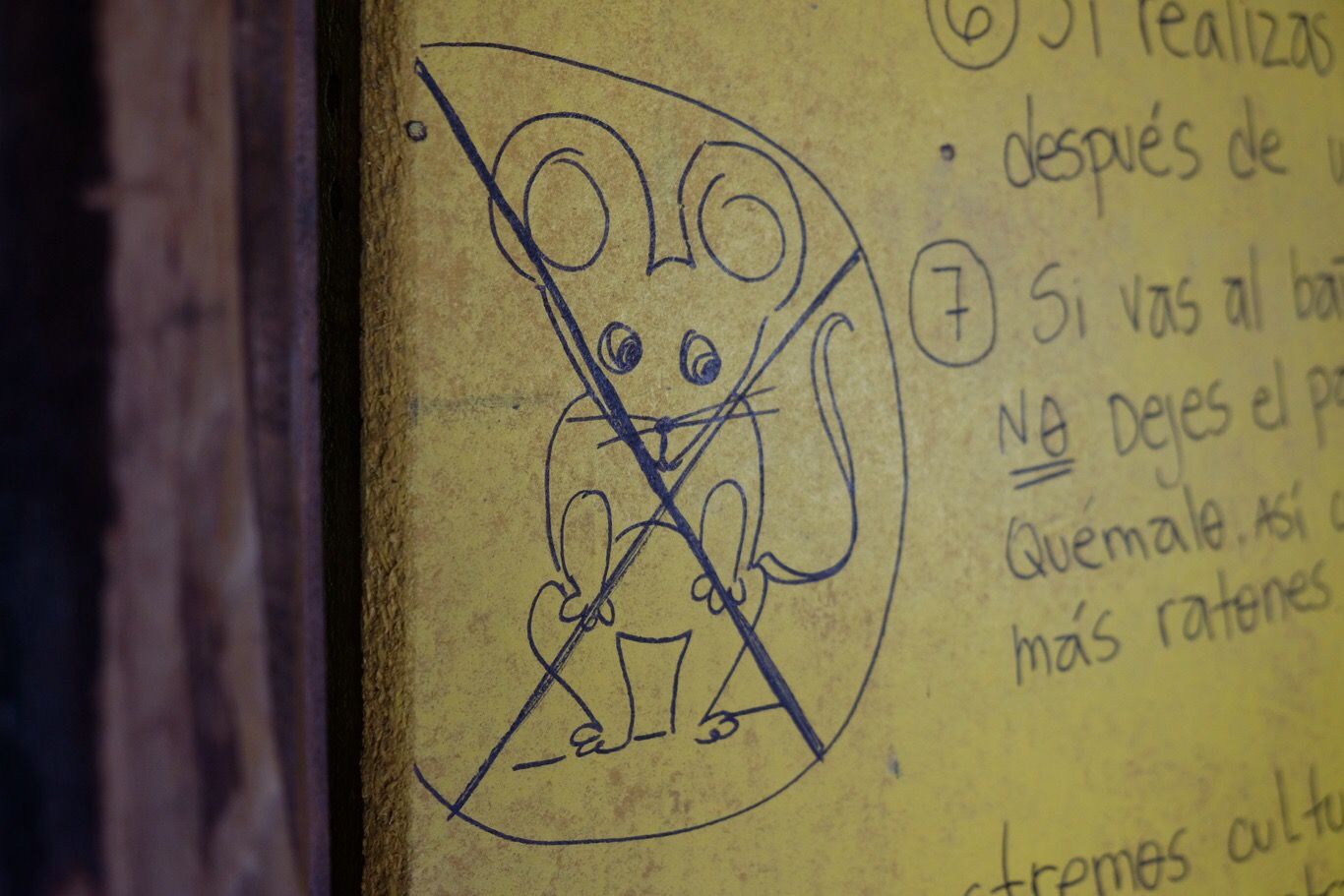 Patagonia compensates, a bit, for bad weather by providing abandoned buildings for shelter. They even have house rules. 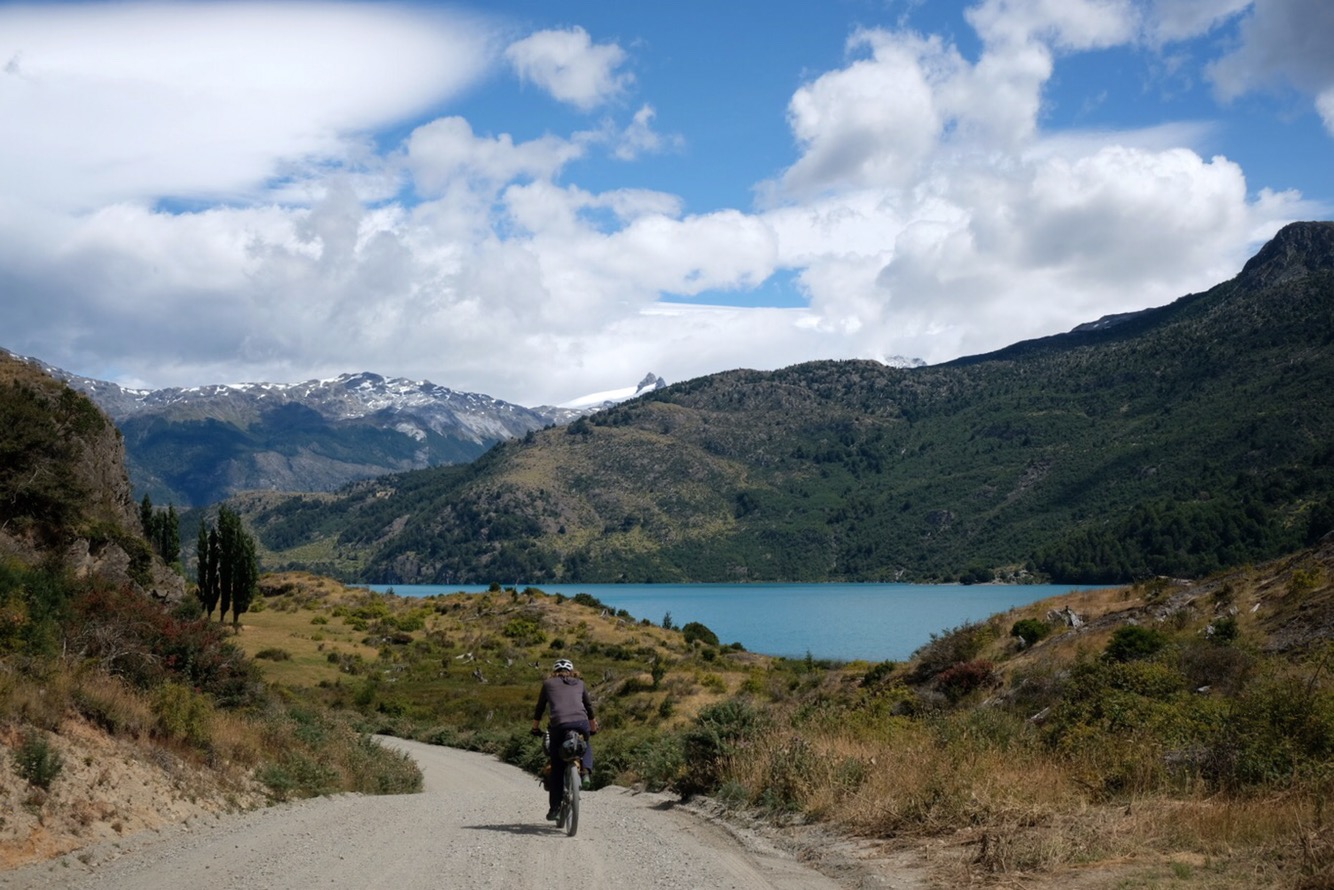 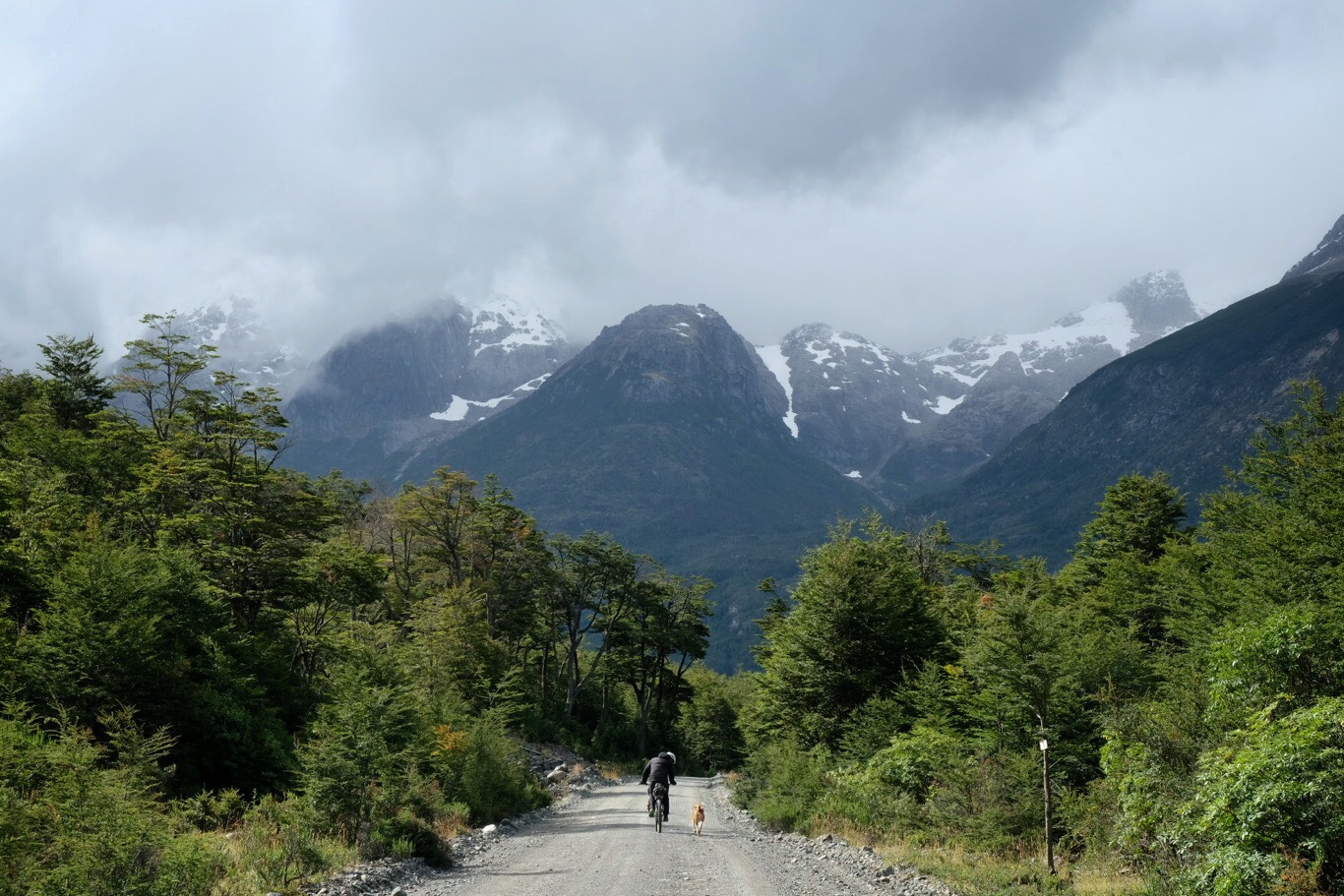 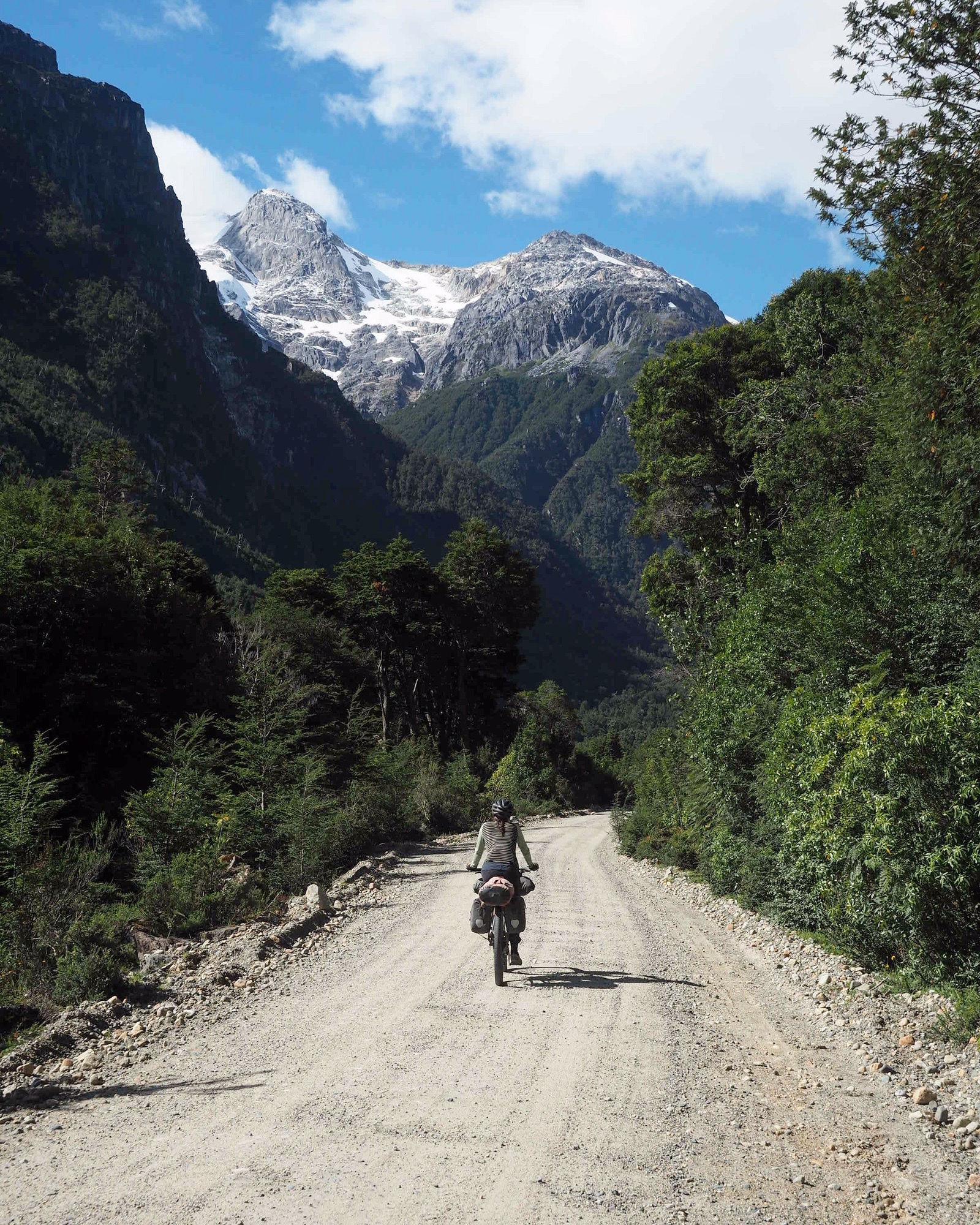 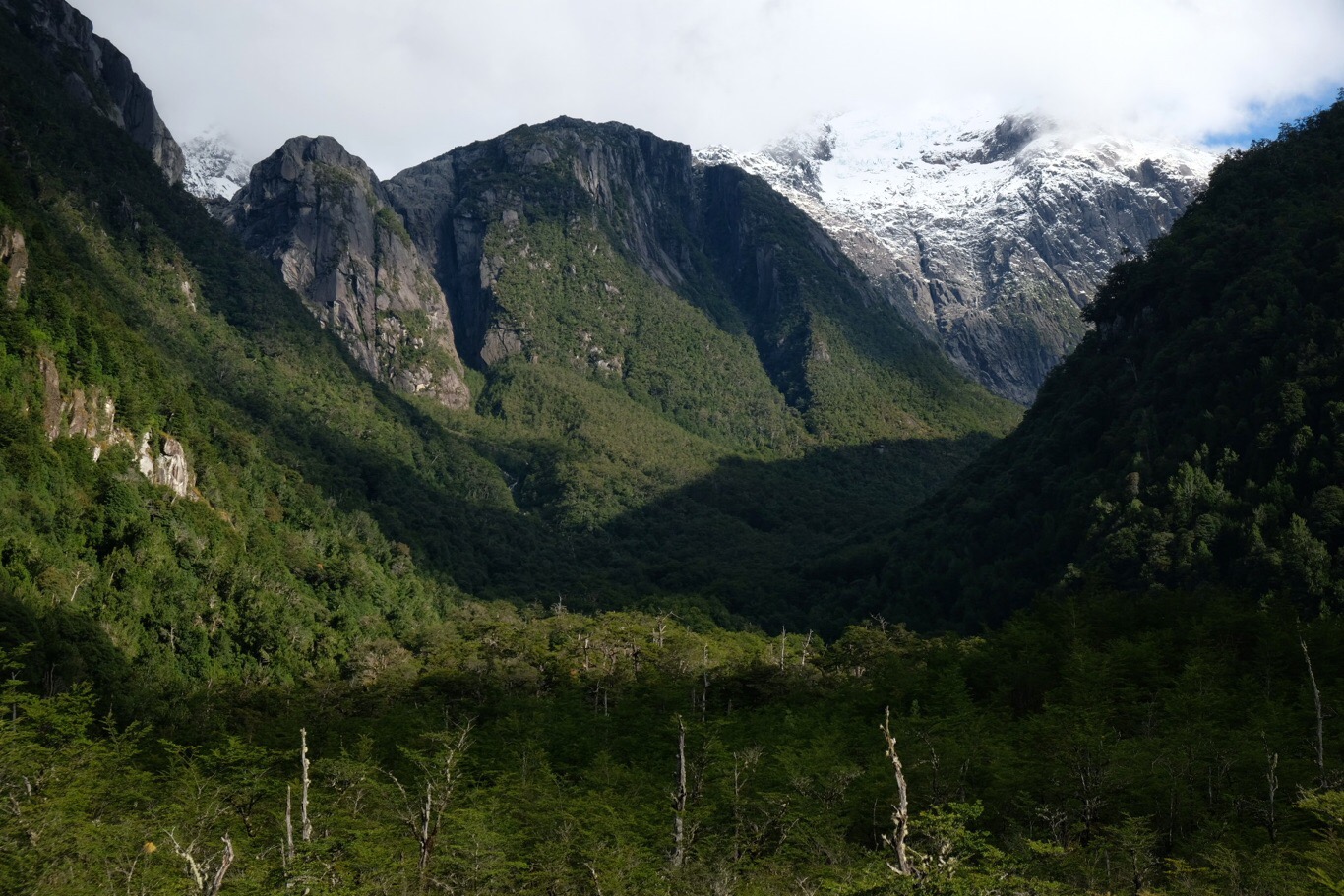 Detouring down the incredible Exploradores road from Rio Puerto Tranquilo provided a few days of little mileage, much rubbernecking and some decent camping. 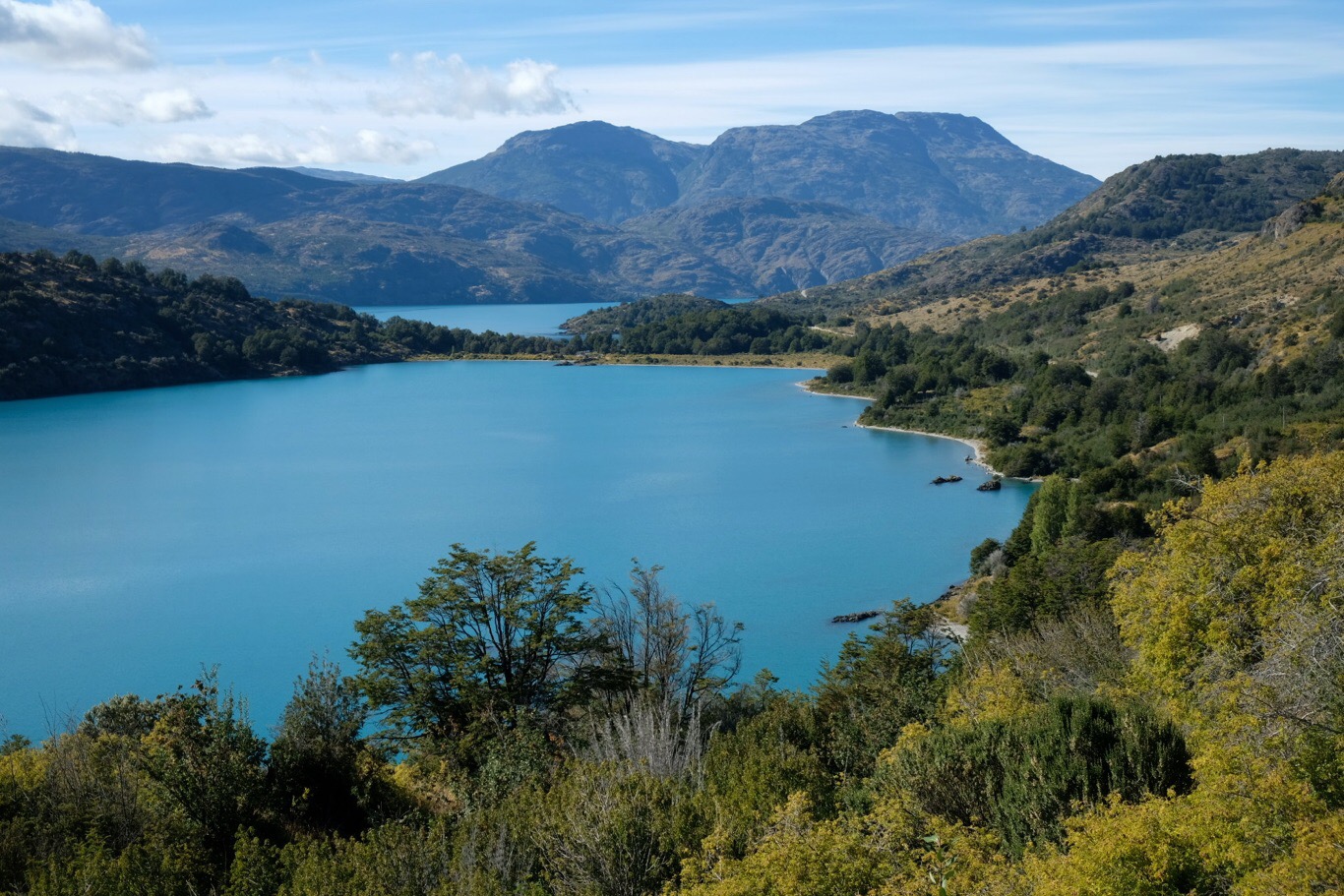 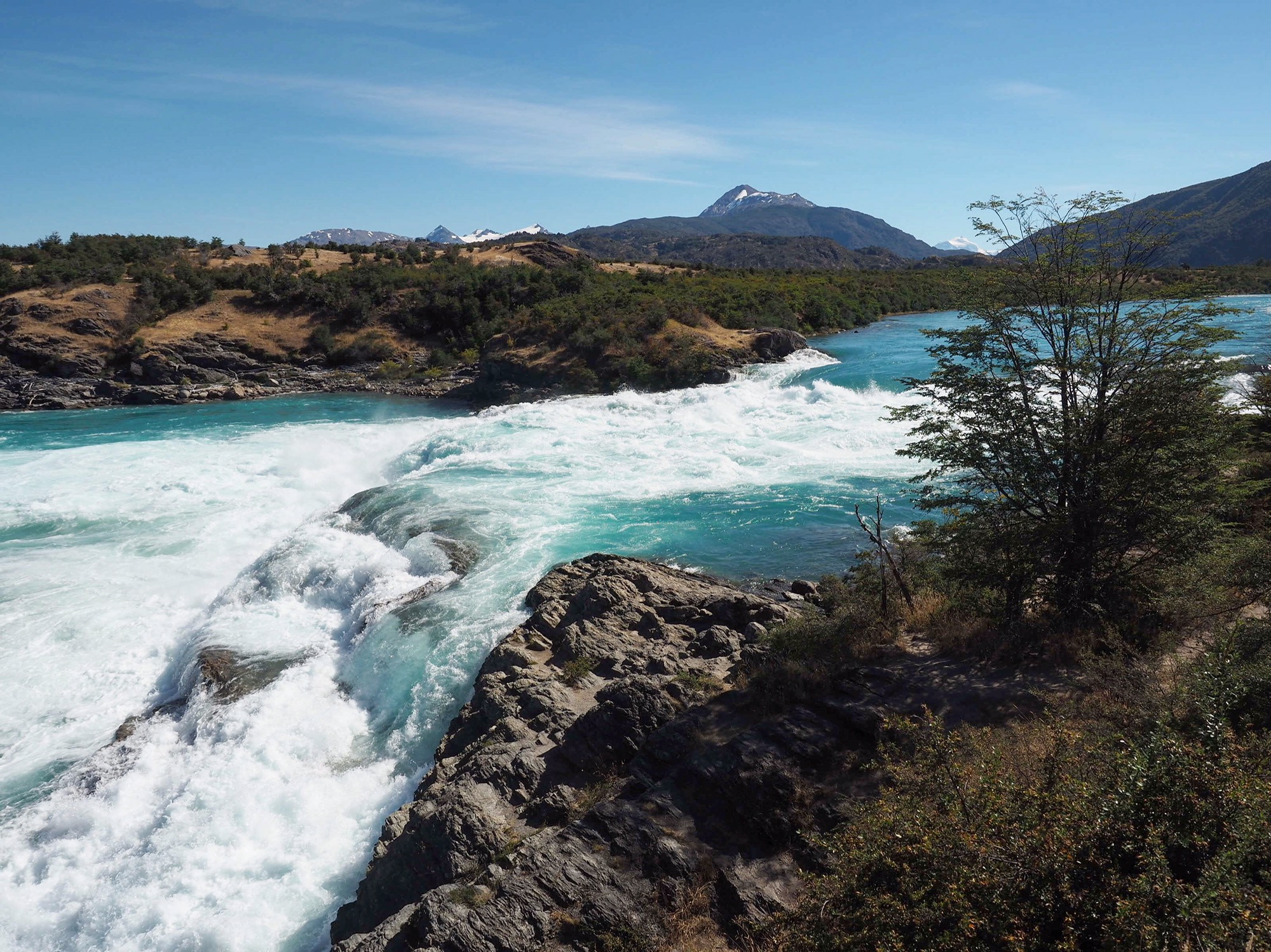 Confluencia, the meeting point of the the glacial, turquoise Rio Baker and the Rio Nef. The Baker is Chile’s largest river in volume of water and efforts to dam it have caused a lot of controversy. 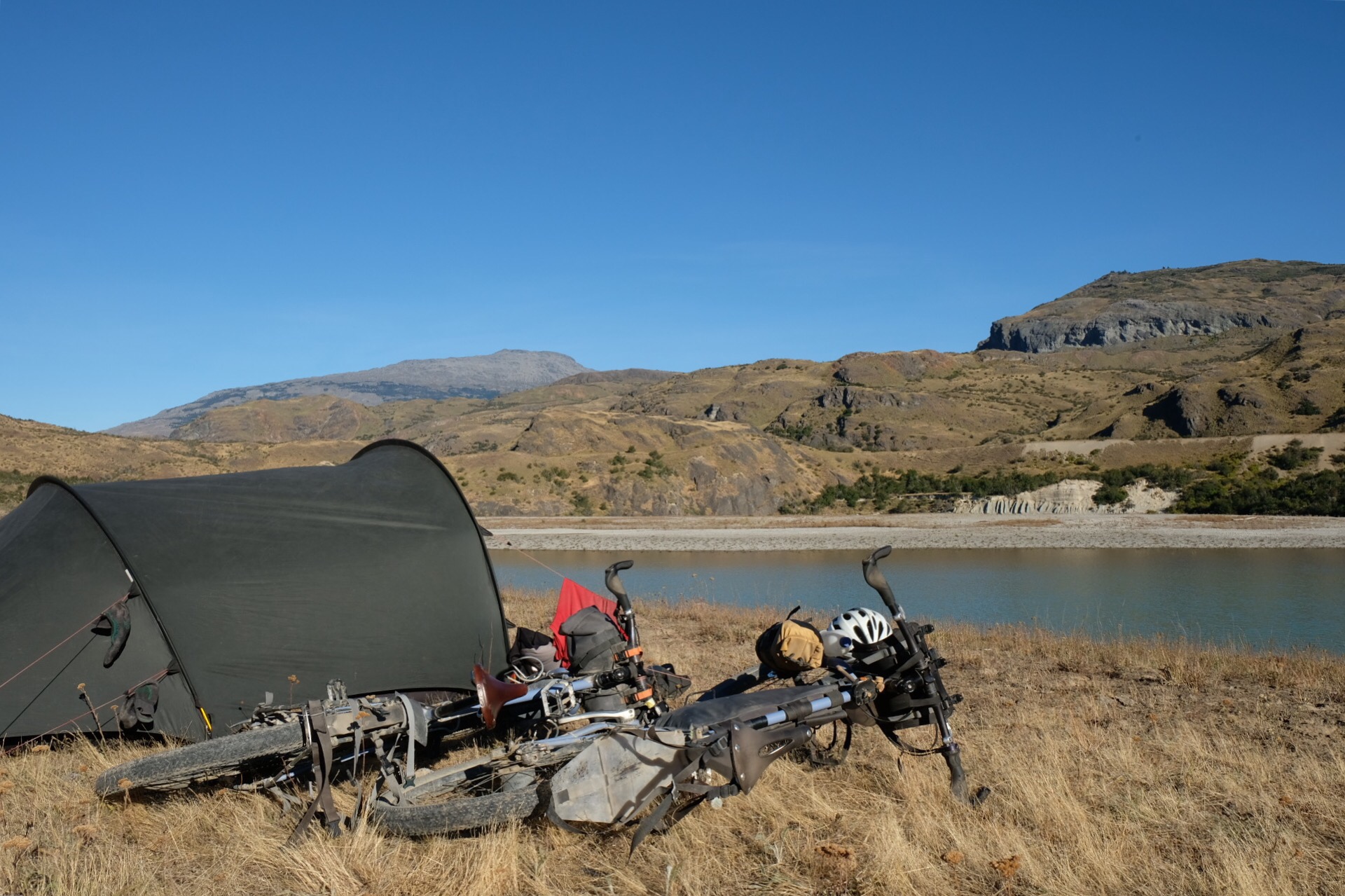 An app called iOverlander is the go-to for people in cars, on bikes and on foot looking for free places to camp. Unfortunately after checking out a few of the places listed along the way we found them to be mostly trashed by people unfamiliar with ‘Leave no trace’ ethics. Toilet paper trails through the bush and unburied piles of shit are a sad and common sight. This was not one of those places, this place was awesome. 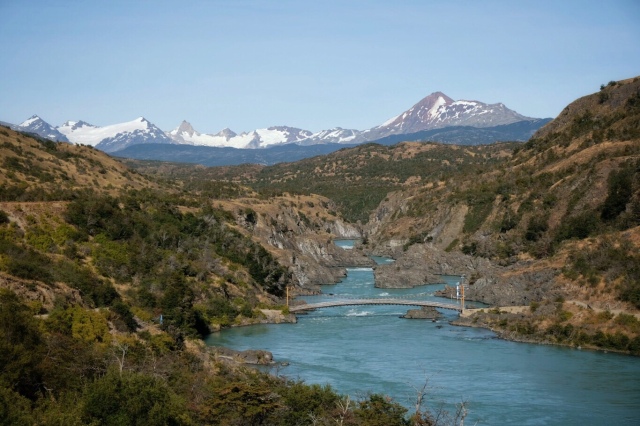 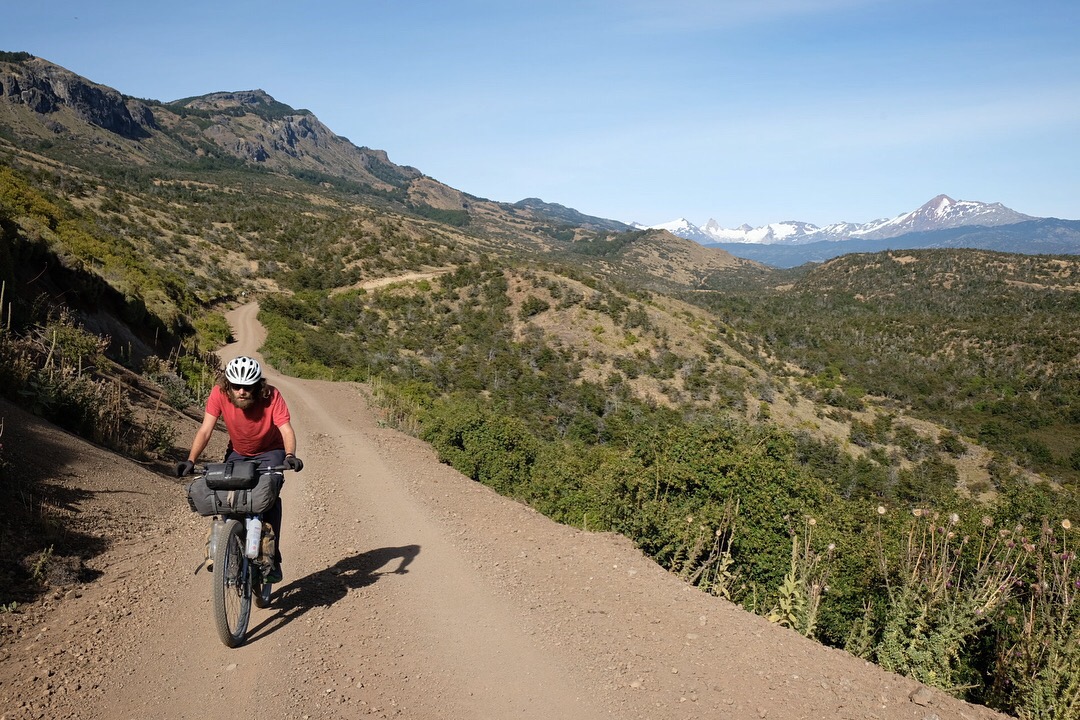 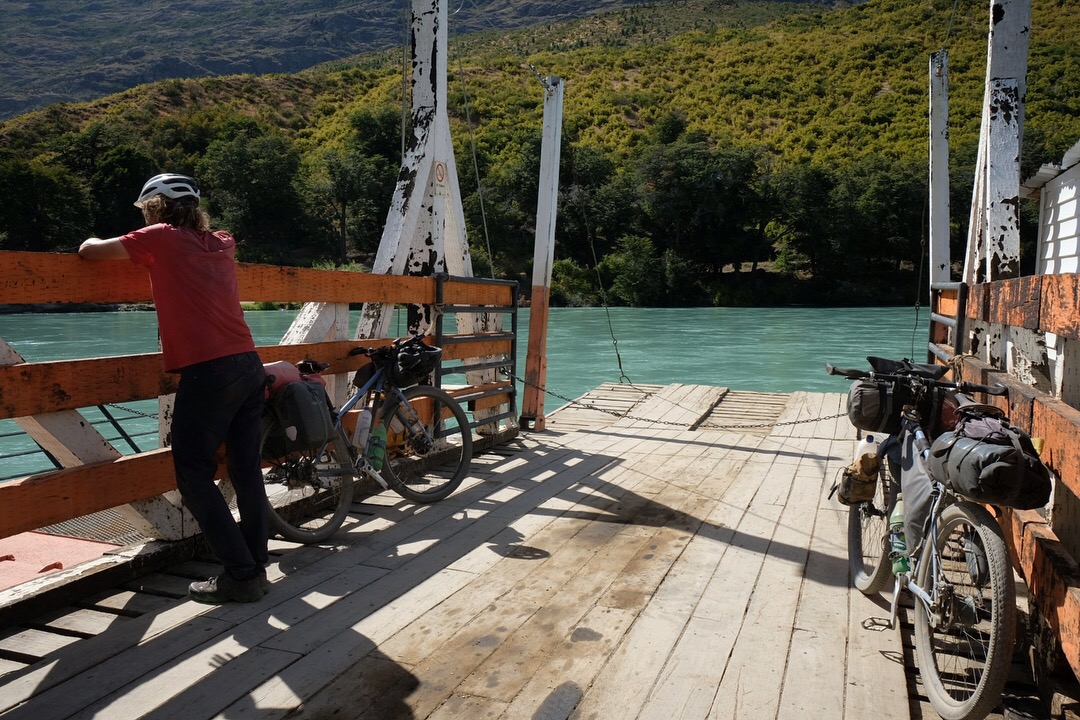 Detouring from the Austral onto the X890, a wonderful little stretch starting with a cool old bridge and finishing with the Balsa Baker, a barge tethered to a cable that will collect you on arrival, as long as the two guys aren’t on their lunch break. 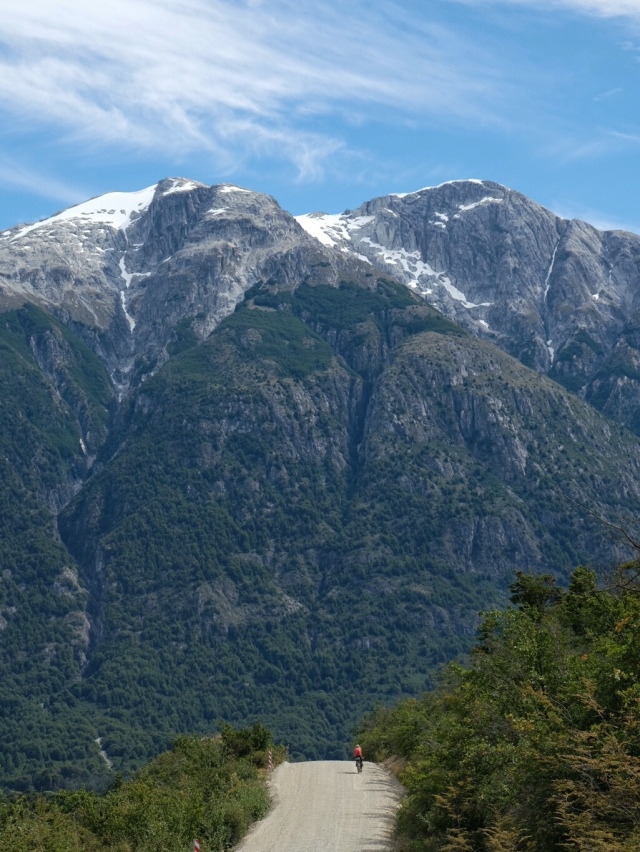 The Austral’s popularity is not unfounded. There are indeed some sweet views. 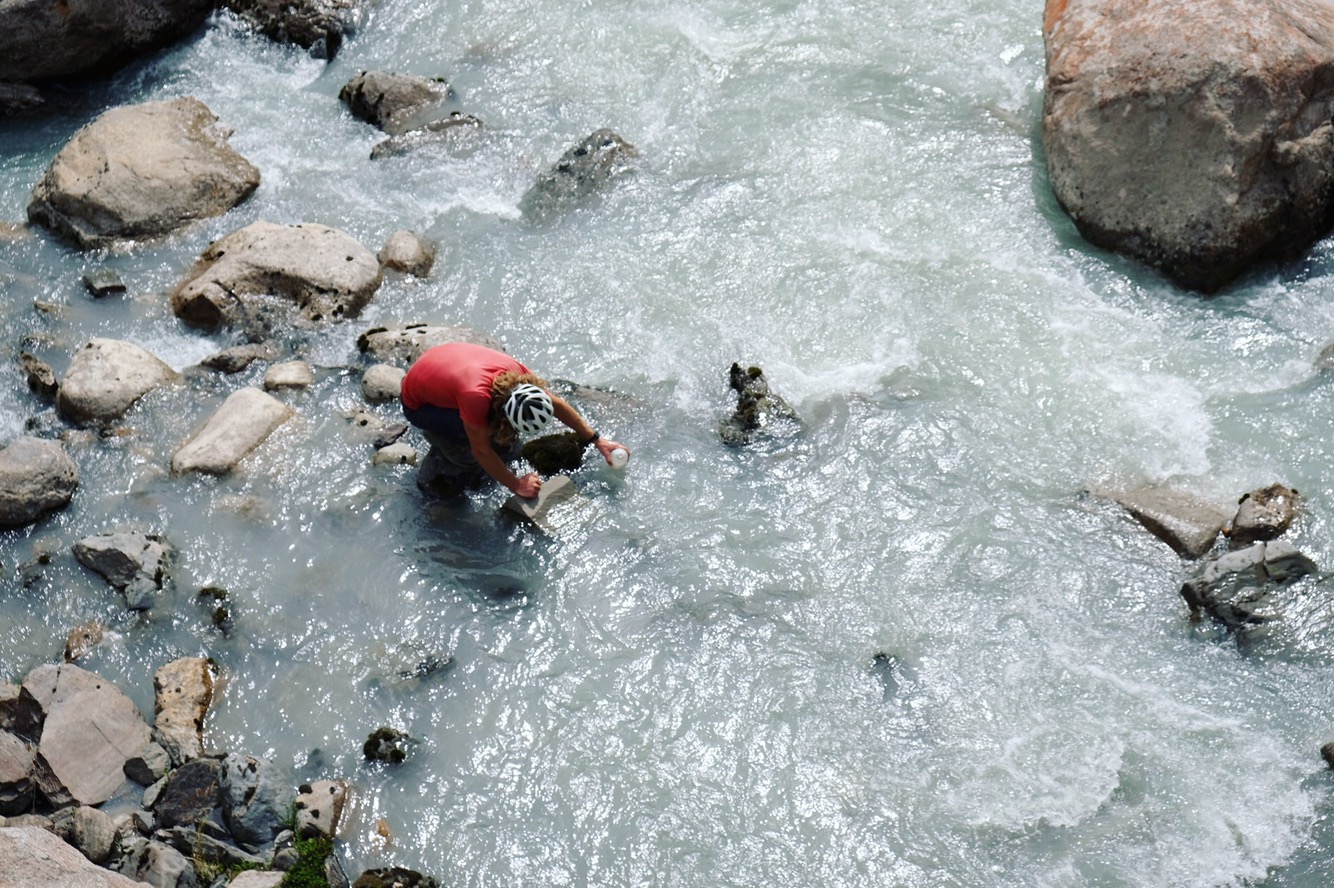 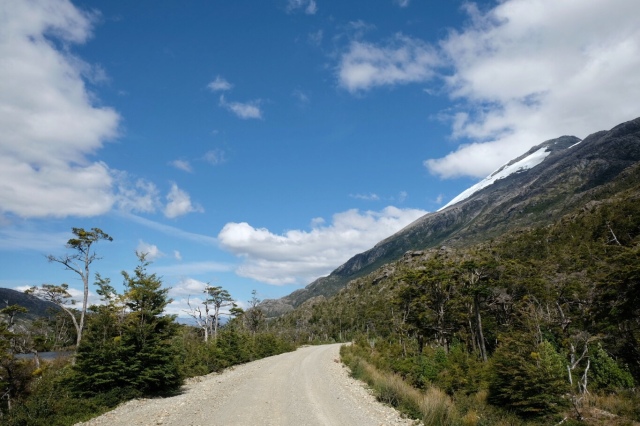 A peaceful last 100km to Villa O’Higgins. It wasn’t exactly all blue skies and sunny, though it may look it. 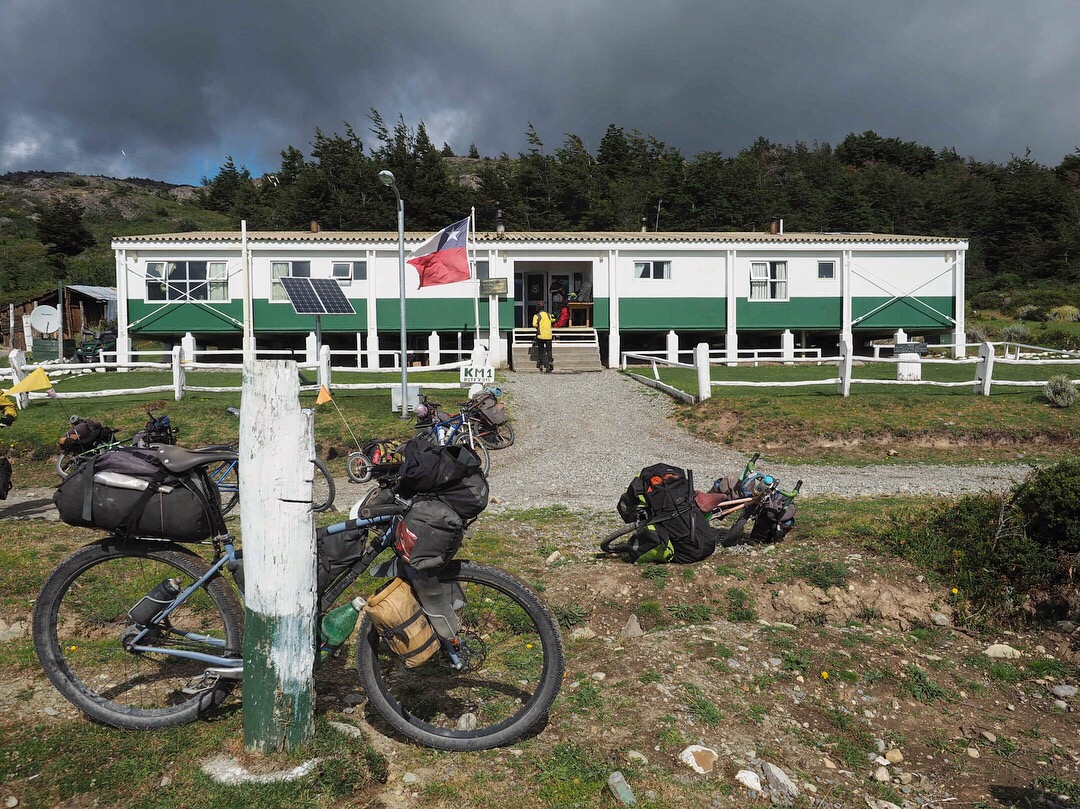 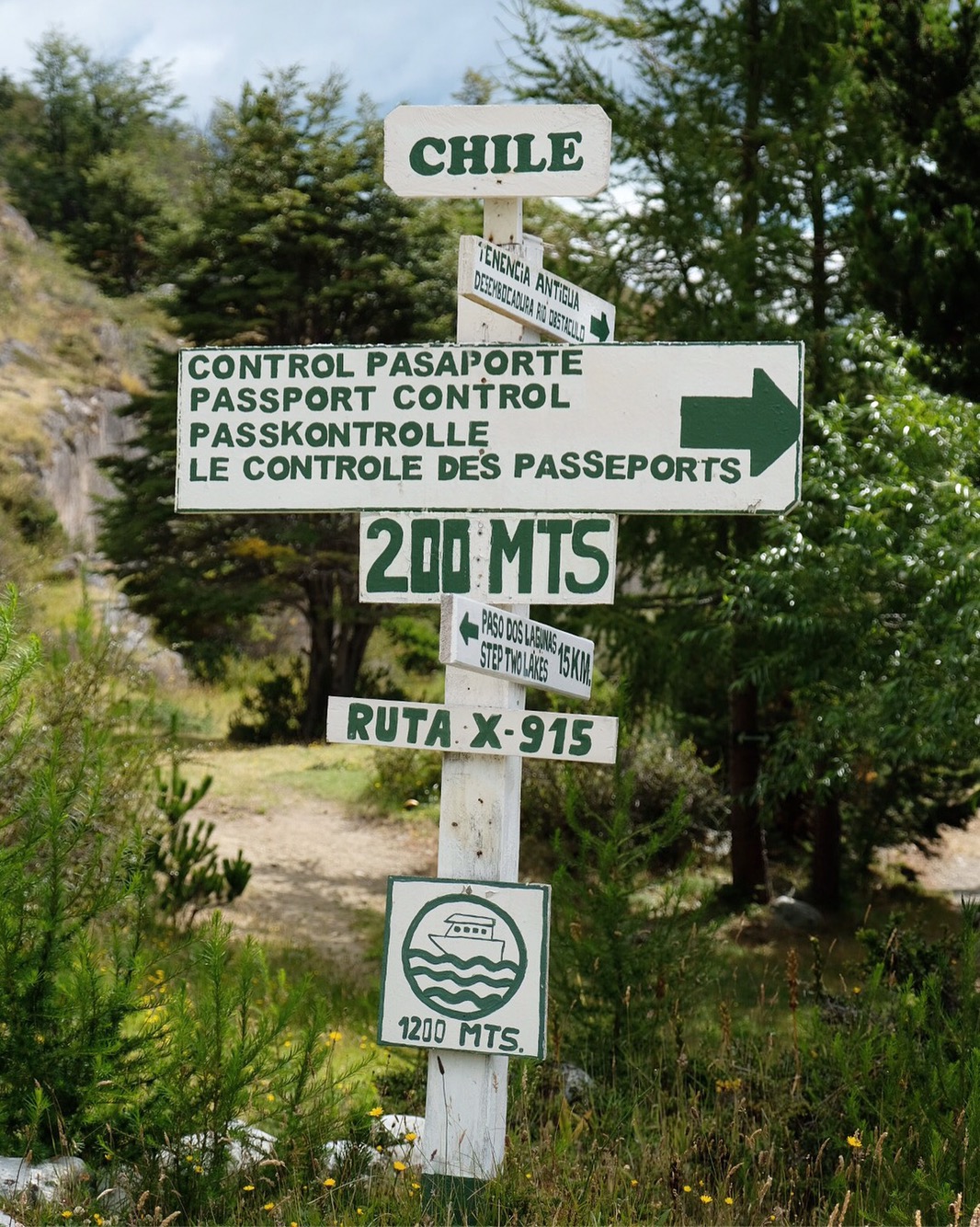 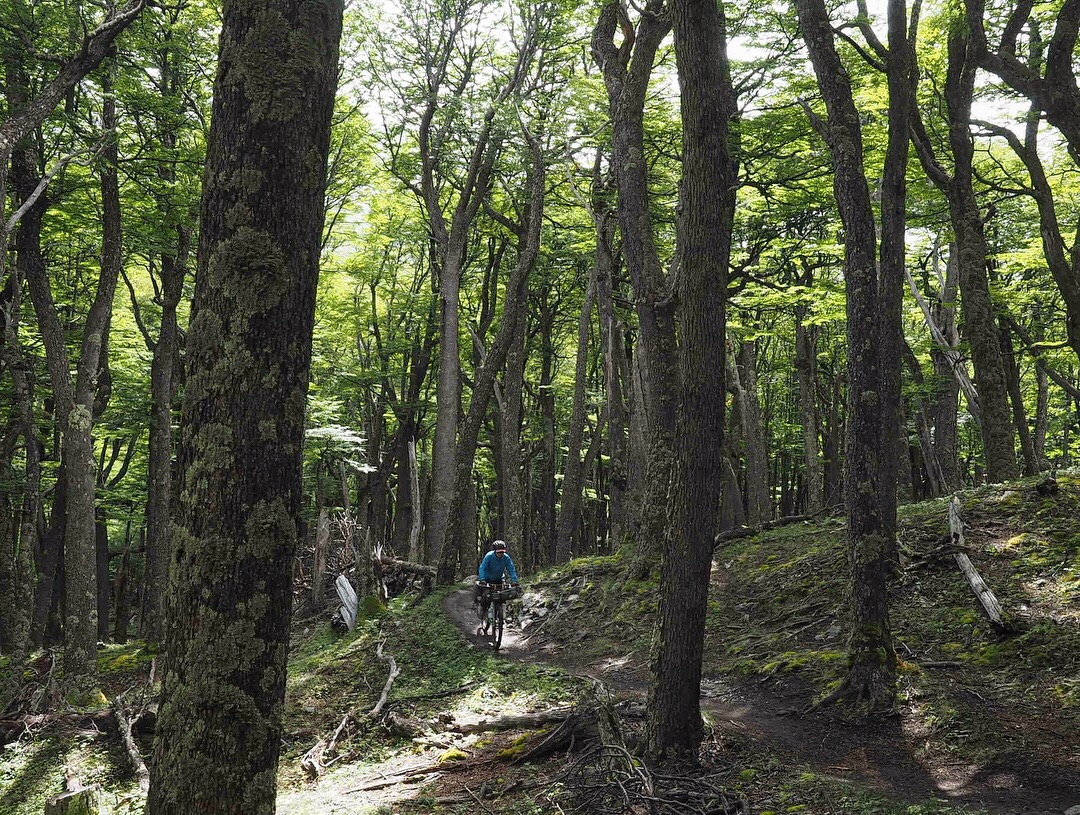 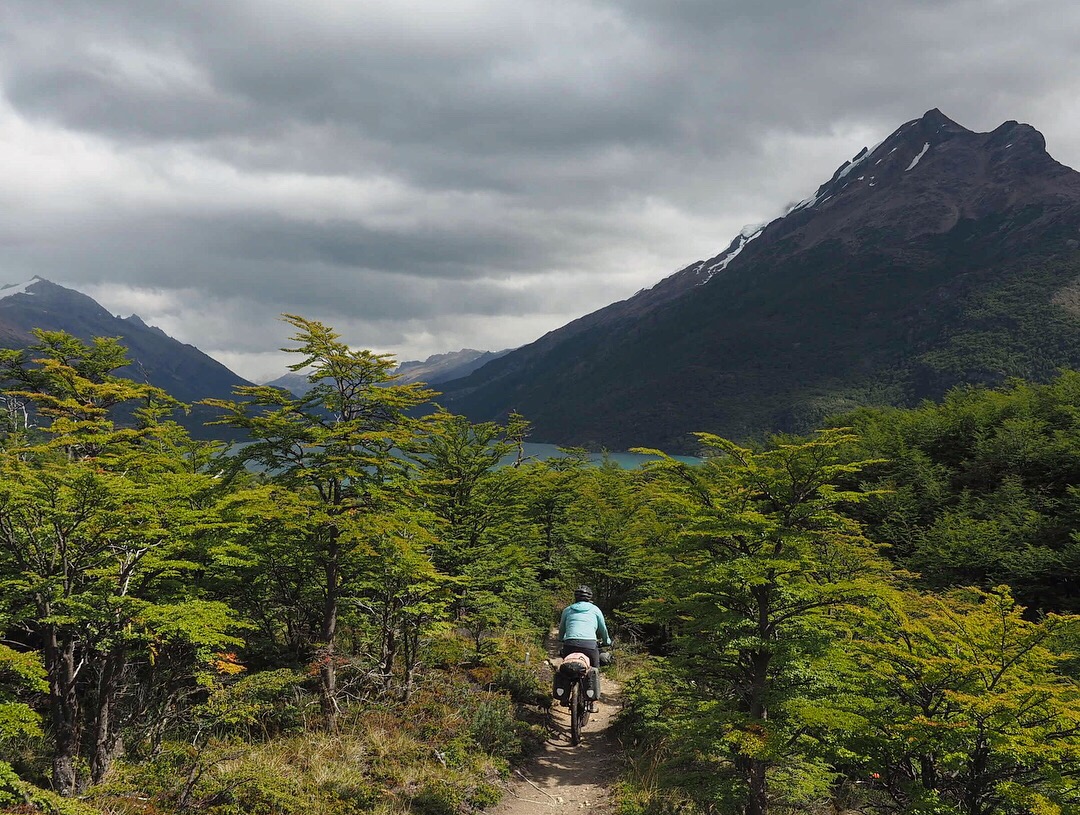 The fantastic crossing from the Chilean town of Villa O’Higgins, last stop on the Carretera Austral, to Lago del Desierto in Argentina. It’s infamous among cyclists, because despite having a 6km section of hiking track it’s still the most common way to cross into Argentina and avoid a detour of hundreds of kilometres. Opinions span from loathing to loving, maybe depending on how much gear you’re carrying. 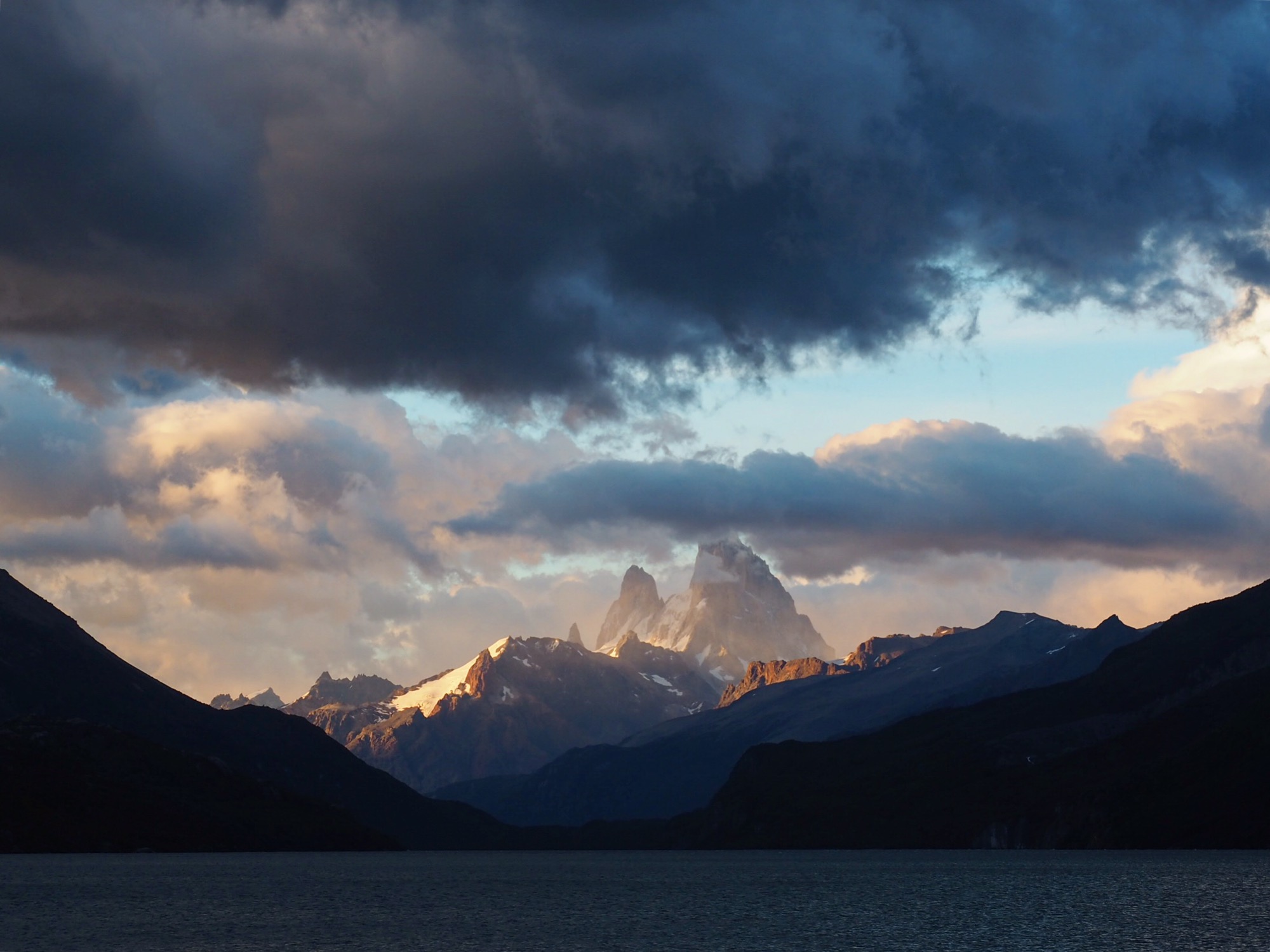 Morning view of Fitzroy from the tent. 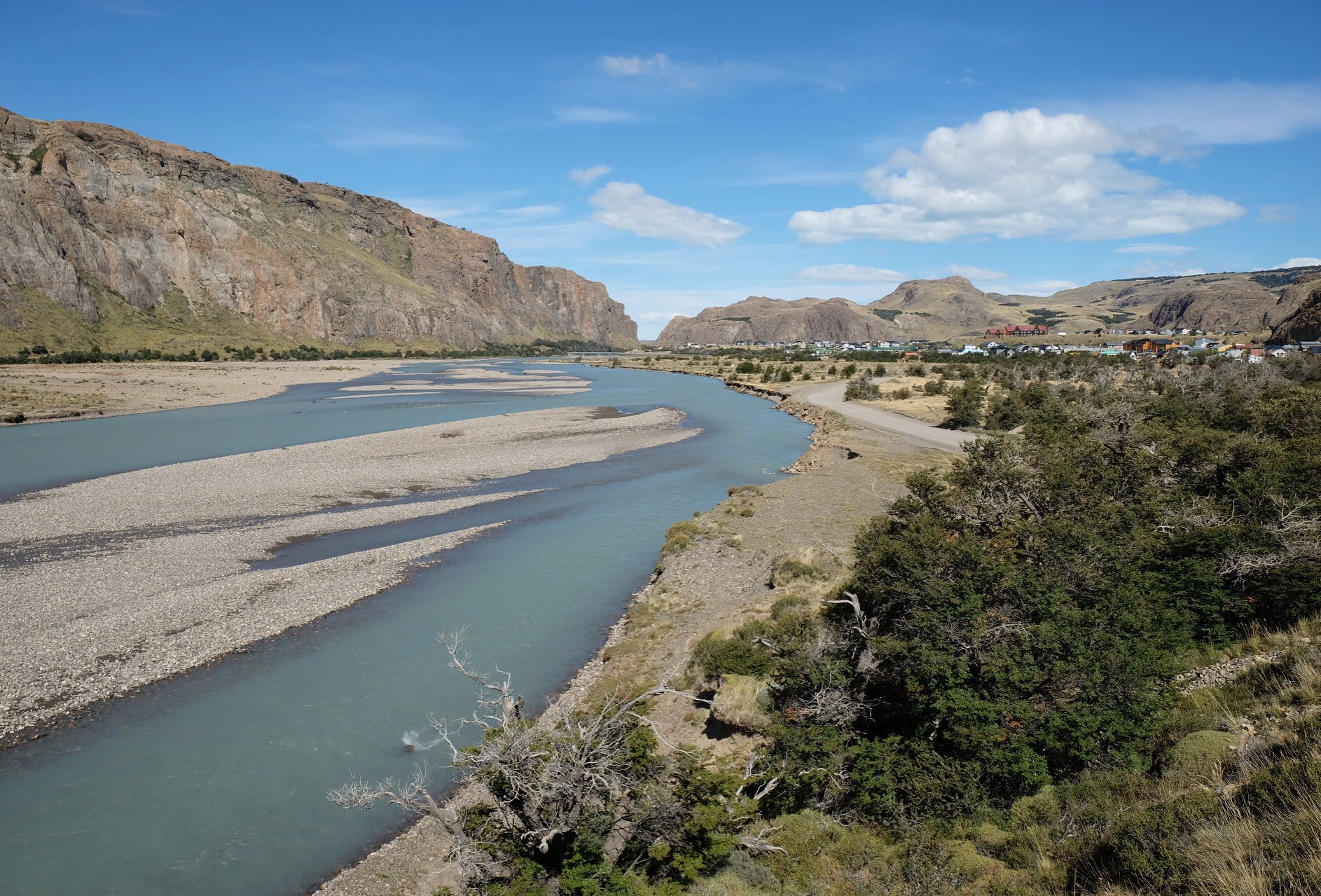 Rolling into El Chalten, the base for the famous Fitzroy and this part of Los Glaciares National Park. Time to explore the mountains on foot and face reality – this was our self imposed deadline for making a post-Patagonia plan… 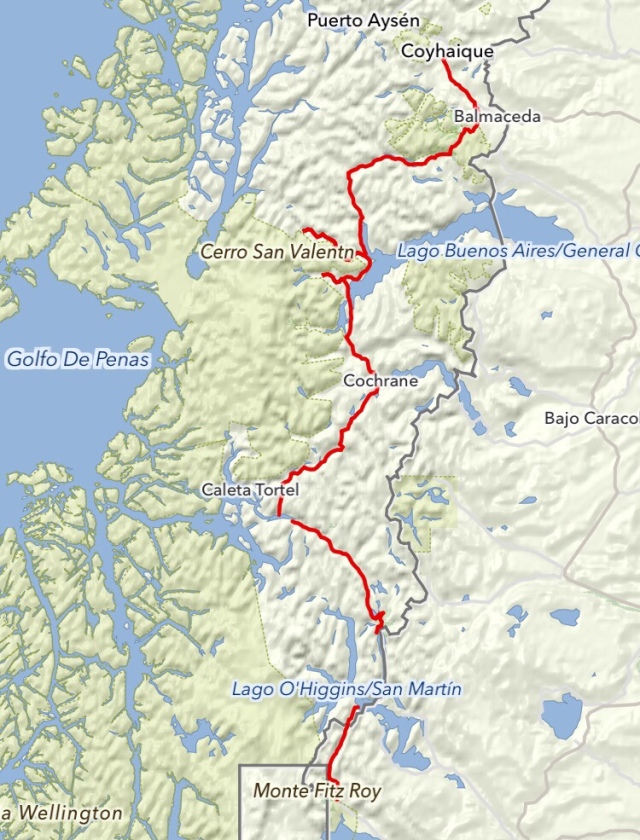 Download our GPX for the Cerro Castillo circuit hike

If you can come at any other time than January–February, seriously consider doing that instead.

If you don’t plan on taking any detours I suspect the backroads from Villa Cerro Castillo to Puerto Ibáñez, Chile Chico and Paso Roballos might offer a more enjoyable ride, at least in high season.

Lago del Desierto: To hike-a-bike or not, that is the question. Having hiked it without the bikes, I would choose to do the same again. Certainly possible with a light bike but it would be up there with the hardest hike-a-bikes we’ve done, minus the reward because, well, you just arrive at the end like everyone else, only more tired.

It costs around $17USD (paid in Argentine pesos) to send just your bike on the boat. At half the cost of a fare it’s expensive, especially given bikes are free when you go on the boat. Maybe you can talk a hiker into acccompanying your bike for you… The hike was nice, taking us a little under 4 hours.

It’s kind of ironic that the Carretera Austral was the only place we almost ran out of alcohol fuel. You’ll find it at pharmacies in Coyhaique and Cochrane. Puerto rio tranquilo has alcohol de quemar at a small shop on the right just after the bridge (if heading south). I’m unsure about Villa O’Higgins.

One thought on “Into the funnel: Coyhaique to El Chalten on the southern Carretera Austral”