We develop a gluttonous olive baguette and goats cheese habit in San Pedro and when we make our early morning escape, freshly baked loaves are secured to the handlebars and an extra large slab of cheese slowly sweats in the rising temperature. A departure from ‘civilisation’ demands packing in a few treats you won’t be seeing for a while. The cheese doesn’t make it through the day, but food will be generally tightly rationed for the next week while we tackle the legendary (seemingly among only a handful of people) Paso Socompa – One of what will likely be a few crossings of the Andes as we hopscotch our way south down Chile and Argentina.

A meandering and less than thrilling first few days is saved by the fact we are overjoyed to be on the road south again. This marks the resumption of our route to Patagonia, having spent the last three months riding in circles (though they were some excellent circles) and waiting for some Andean passes to open. The heat isn’t unbearable, and we have to concede the flat roads that might usually bore are quite the treat after our Sairecabur (mis)adventure of the last few days.

The charm of Paso Socompa lies in its remoteness and faded glory. Once the primary crossing of the Andes in this area for both road and rail, it’s now almost deserted. These days the pass is closed to motorised traffic (cyclists and hikers only, who are few and far between) and though an infrequent freight train has resumed service, the stations along the route were long ago abandoned. The bigger stations are whole clusters of falling-down structures from different eras that hint at more lively times. They make for great diversions, shelters and exploring.

Crossing the Socompa border is a delight like no other border crossing. The whole experience and place feel almost absurd. We’re greeted by some barking dogs that rouse the carabineros (police) then waste no time in pissing on Andy’s bike. They sulk around looking extremely guilty about it while he tries to figure out which water bottle is leaking. In one building, in a row of otherwise abandoned structures, there are six Chileans in full uniform with weapons strapped to their legs who begin to process our passports. I like to imagine they were hanging out in their man cave out the back then had to hastily suit up for our arrival (Andy got to see behind the scenes while filling up our bottles, indeed it was all enormous sofas and a large screen tv playing football). Being used to more efficient and clinical border crossings we struggle to contain our amusement by what ensues. All sorts of things are transcribed, photocopied, stamped and five of them take turns to weigh in on the process. I ask when the last tourist passed through and they have to think for a while before deciding… last year? Yeah, it must have been last year… It’s no wonder then that the process is savoured for an hour and a half. When we check to see if we’re done they implore us to wait just a little longer – a few photos are needed to commemorate the occasion – before they send us on our merry way with an armload of biscuits. High in sugar, fat and calories state the warning signs on the packaging. Pretty much what we live on these days.

On the Argentine side just two casually dressed fellas deftly go through the formalities with far less fanfare, though it turns out they accidentally stamped my passport with an exit stamp instead of entrance. There are hints of an offer of a place to crash for the night but unfortunately it’s early in the day and we need to push on. We’ve heard rumours of their fine hospitality including hot meals, hot showers and warm beds.

Once in Argentina the scenery is stunning, vast and colourful. Well, colourful within a muted rainbow of greys and browns. Like your eyes adjusting to the dark, you become attuned to the subtleties of the Puna’s beauty. It’s also insanely windy and the featureless, broad, sweeping lines of the landscape create few places to find shelter. Camping in the Puna is not about great views or morning sun, the only goal is wind protection and tent preservation. Often this means the tent door, usually oriented for best views, faces straight into a rock wall, if you’re lucky enough to find one.

We face our windiest day on the way to one of the main old train stations, Estación Caipe, and this tent site borders on the ridiculous – within 4 walls and a roof, the tent is fully guyed out with bikes and breeze blocks, with the winds raging all around us through door frames and long-ago blown out windows. After dark when we’re all tucked up, people arrive and are surprised to see our tent in ‘their’ spot. I can’t imagine what might bring others here, arriving after dark, but of course it turns out to be other cyclists battling the wind – three Argentine guys attempting to climb the summit of Volcán Socompa (6200m) and approaching on bikes. They made it to the pass, but were forced to turn back from the climb on realising they didn’t have enough food for the summit attempt.

Gusts relentlessly crack like thunder all night and I lie awake making deals with the wind gods. I ponder alternative routes to our planned one that continues through the barren and harsh Puna, ones with tailwinds, and maybe a few vineyards for good measure, wouldn’t that be nice? Mmmm… wine. We’re in the land of wine and steak and cowboys, but you wouldn’t know it in the nothingness out here. Daylight arrives and the wind has failed to wear itself out. Reluctantly we ready ourselves for the final dash to Tolar Grande, the first town in six days, and all of its delights. To be fair it isn’t overflowing with them, but our needs are pretty simple these days. A few vegetables, a box of cheap wine and a hot shower are plenty to keep spirits high and legs pedalling. 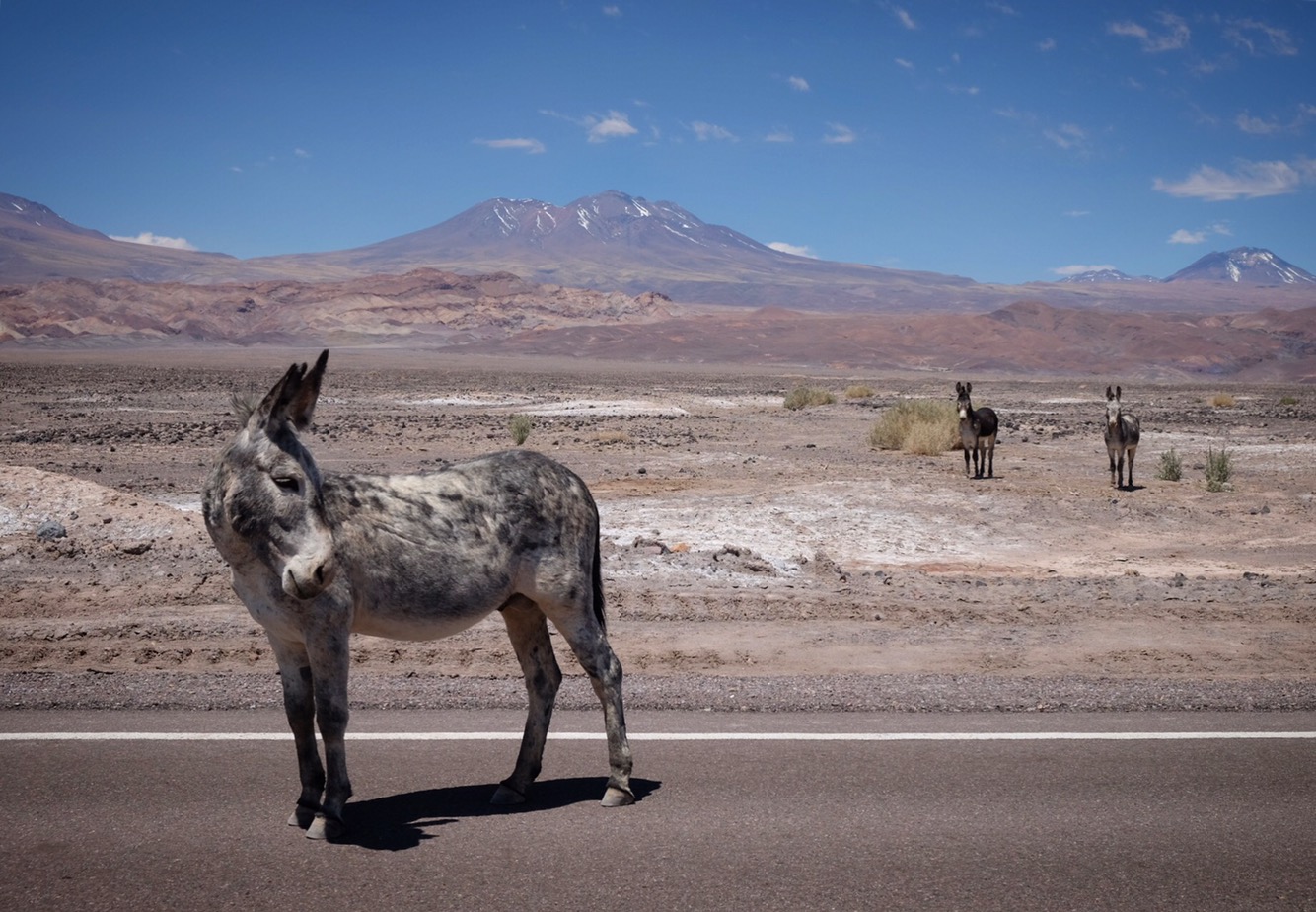 Fauna and flora of the Atacama desert 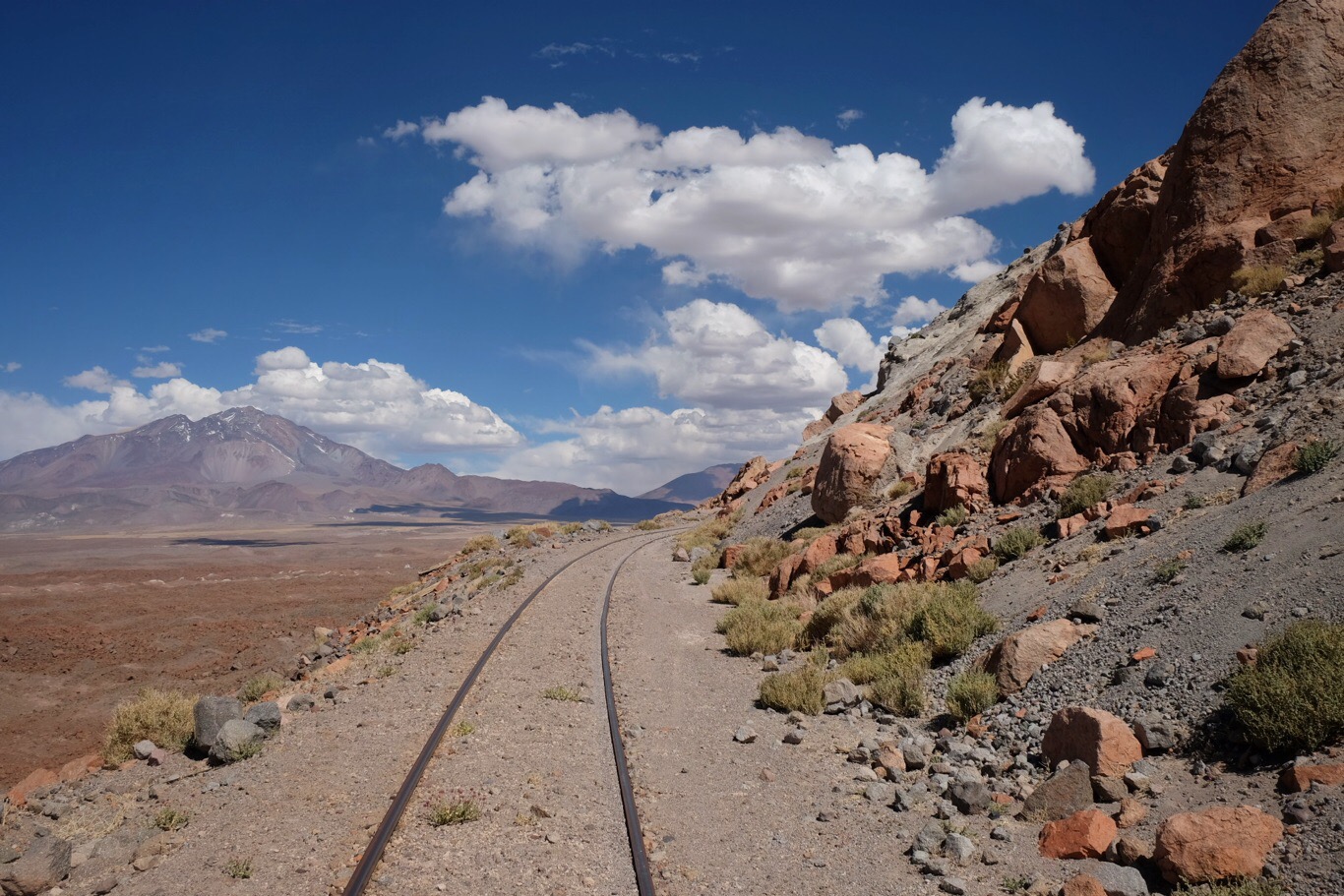 A water carrying hack Andy devised in San Pedro using a 50c bracket from the hardware store and some cable ties. With these extra ledges and straps I can carry 4 bottles on my forks, about 5 litres.

Not keen to take chances with water we decided not to rely on the well at the old Estación Monturaqui, though it seemed the safest bet on the Chilean side. Luckily we hauled enough with us, as when we went to check it out the fresh carcass of a vicuña lay draped with its eyeless head on the edge, body afloat, a fox tearing at the flesh of its neck.

Photo shoot with the Chilean Carabineros 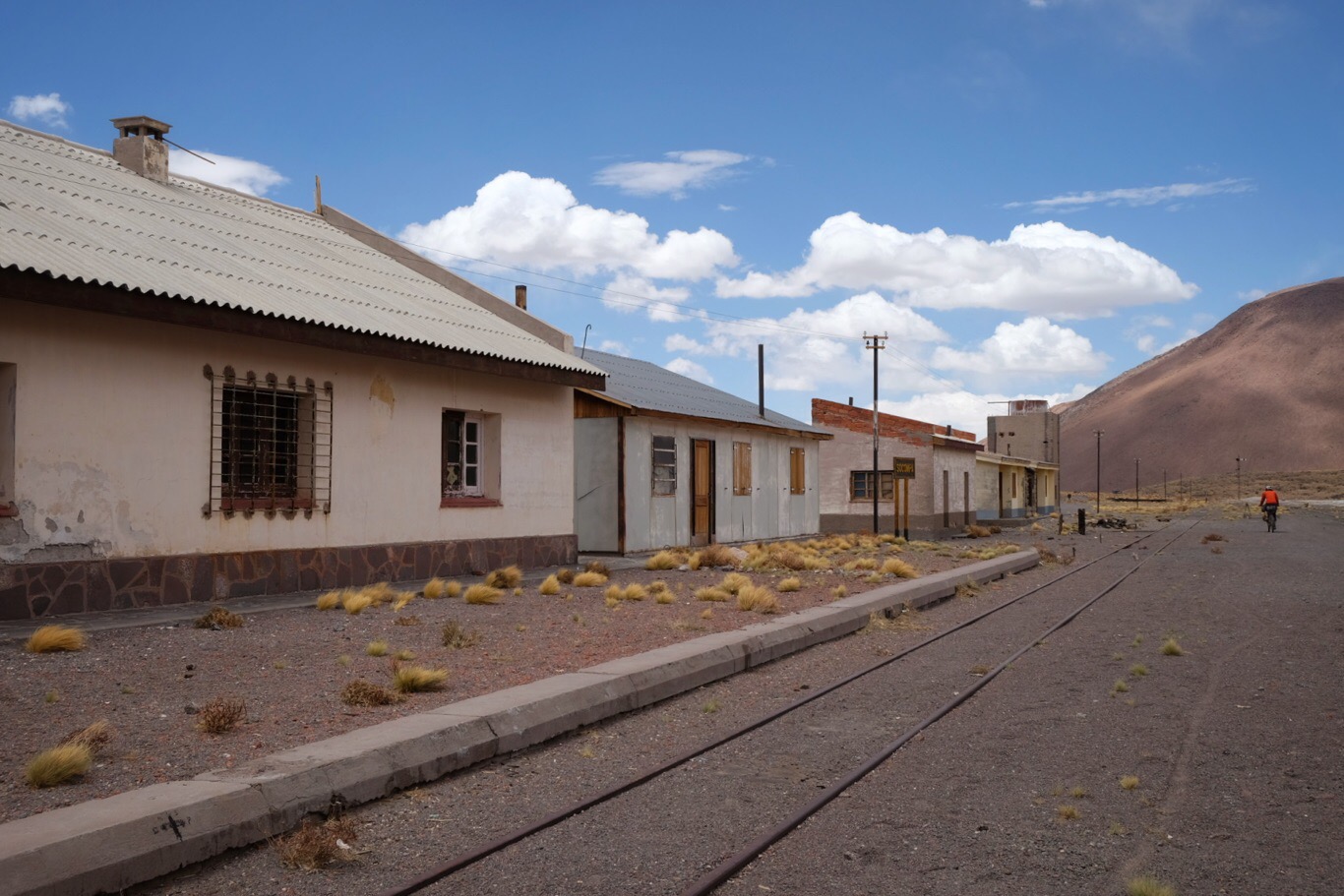 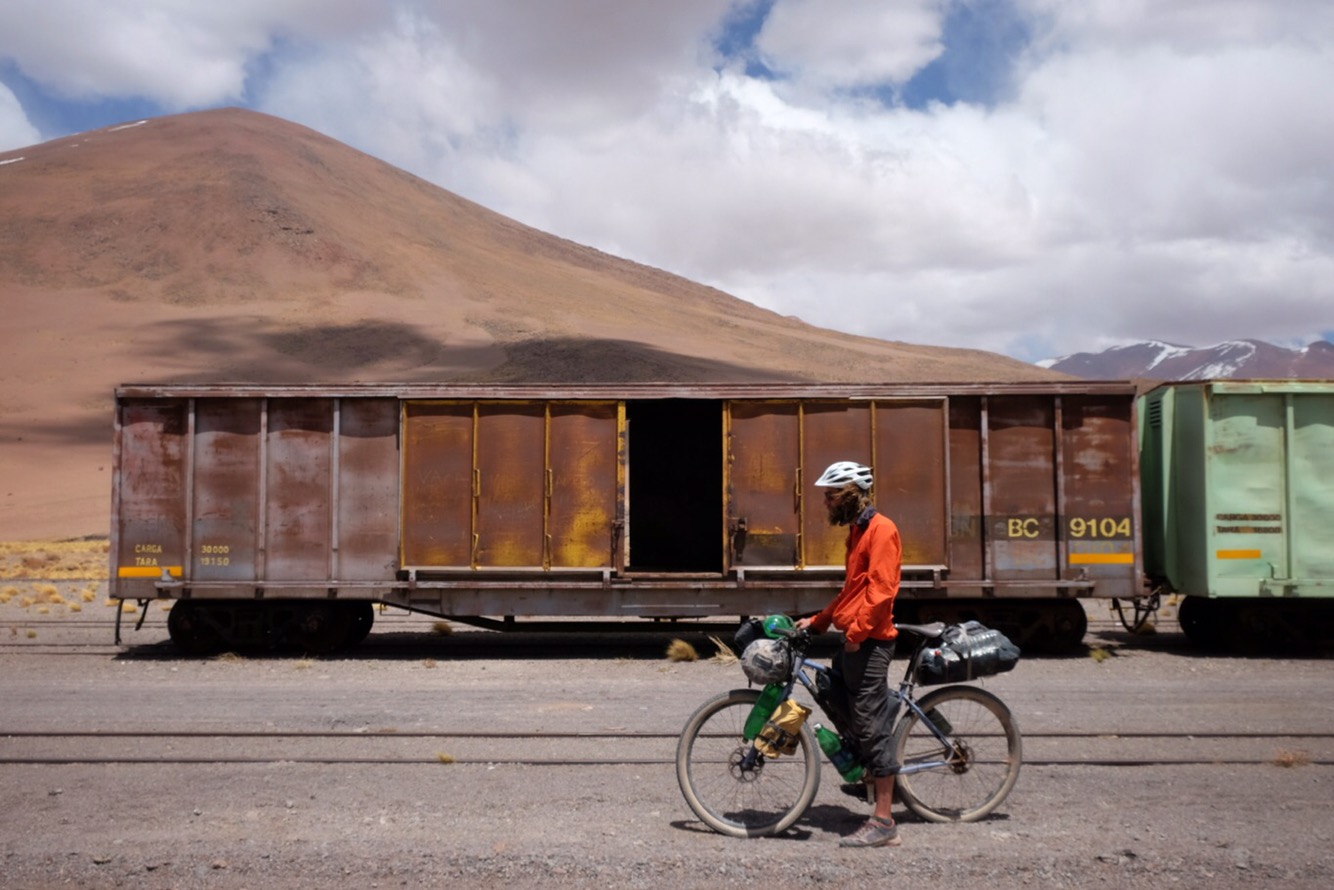 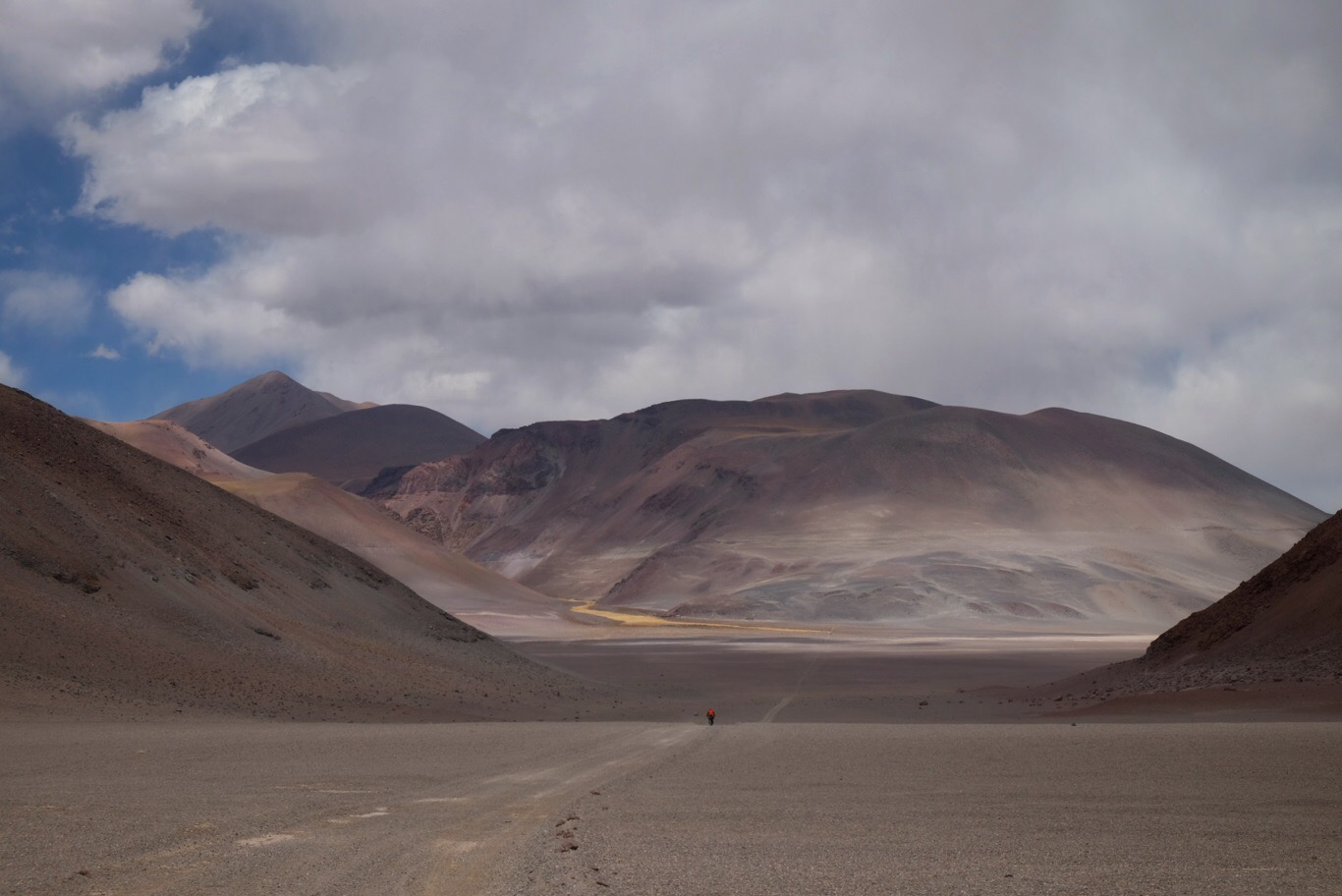 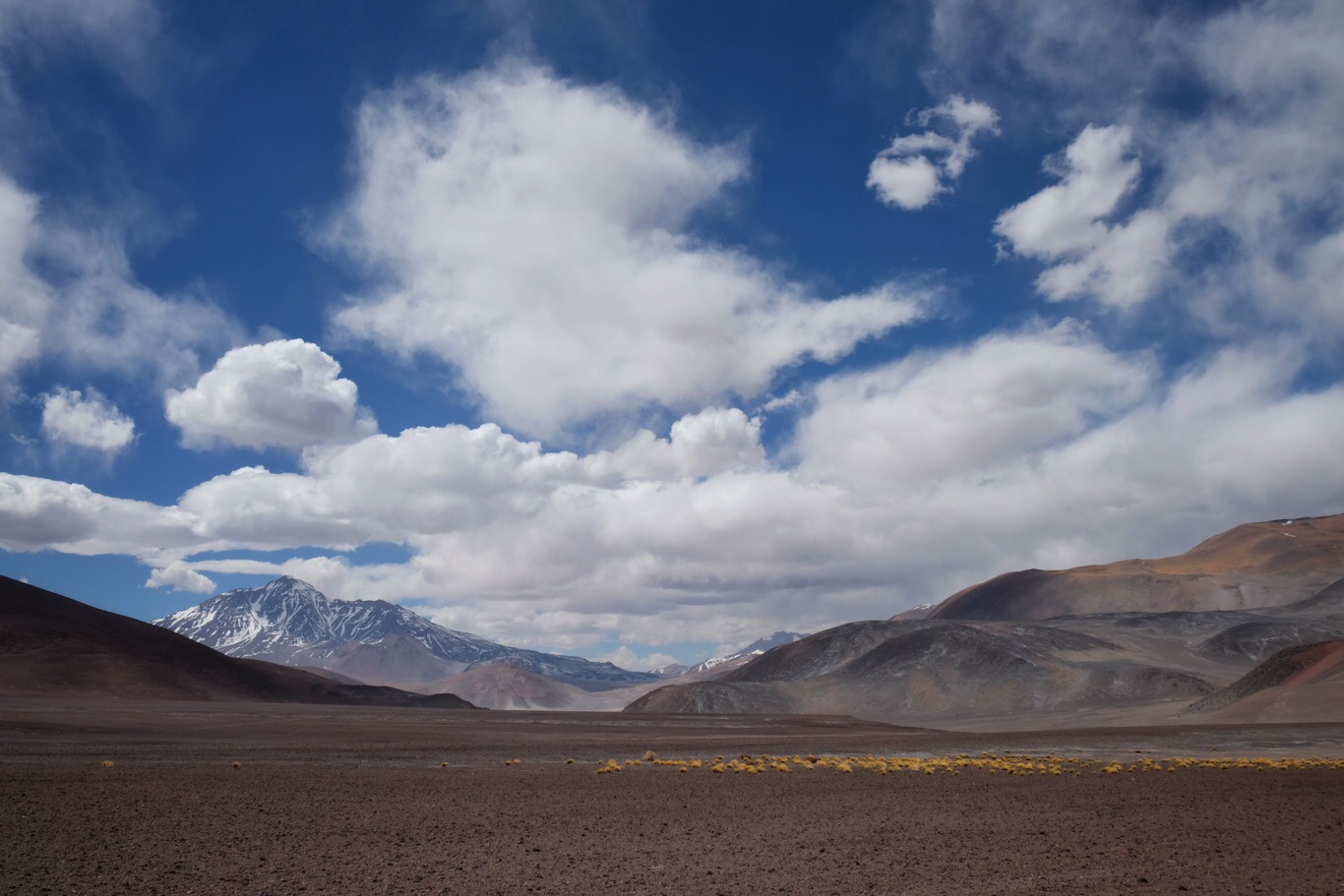 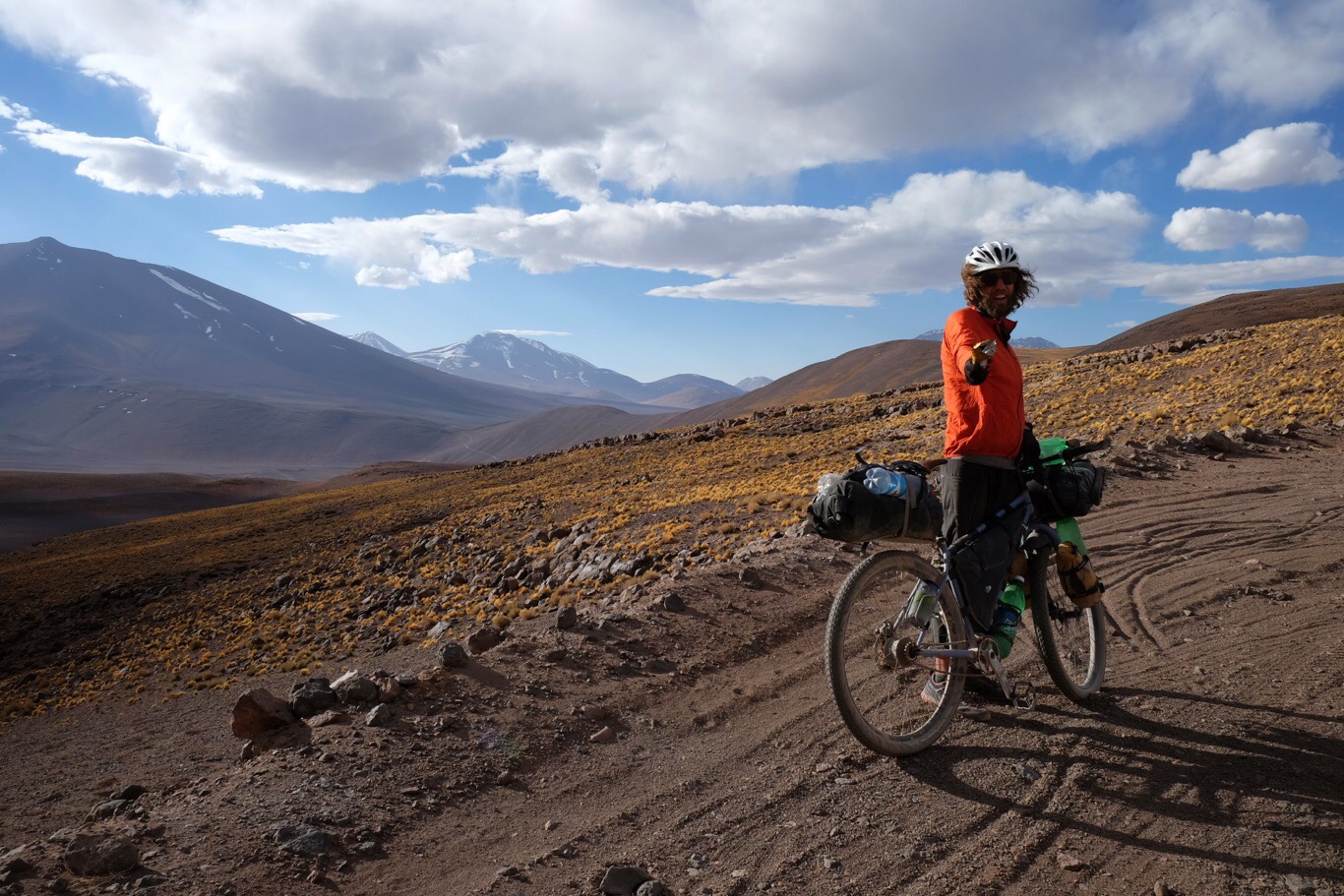 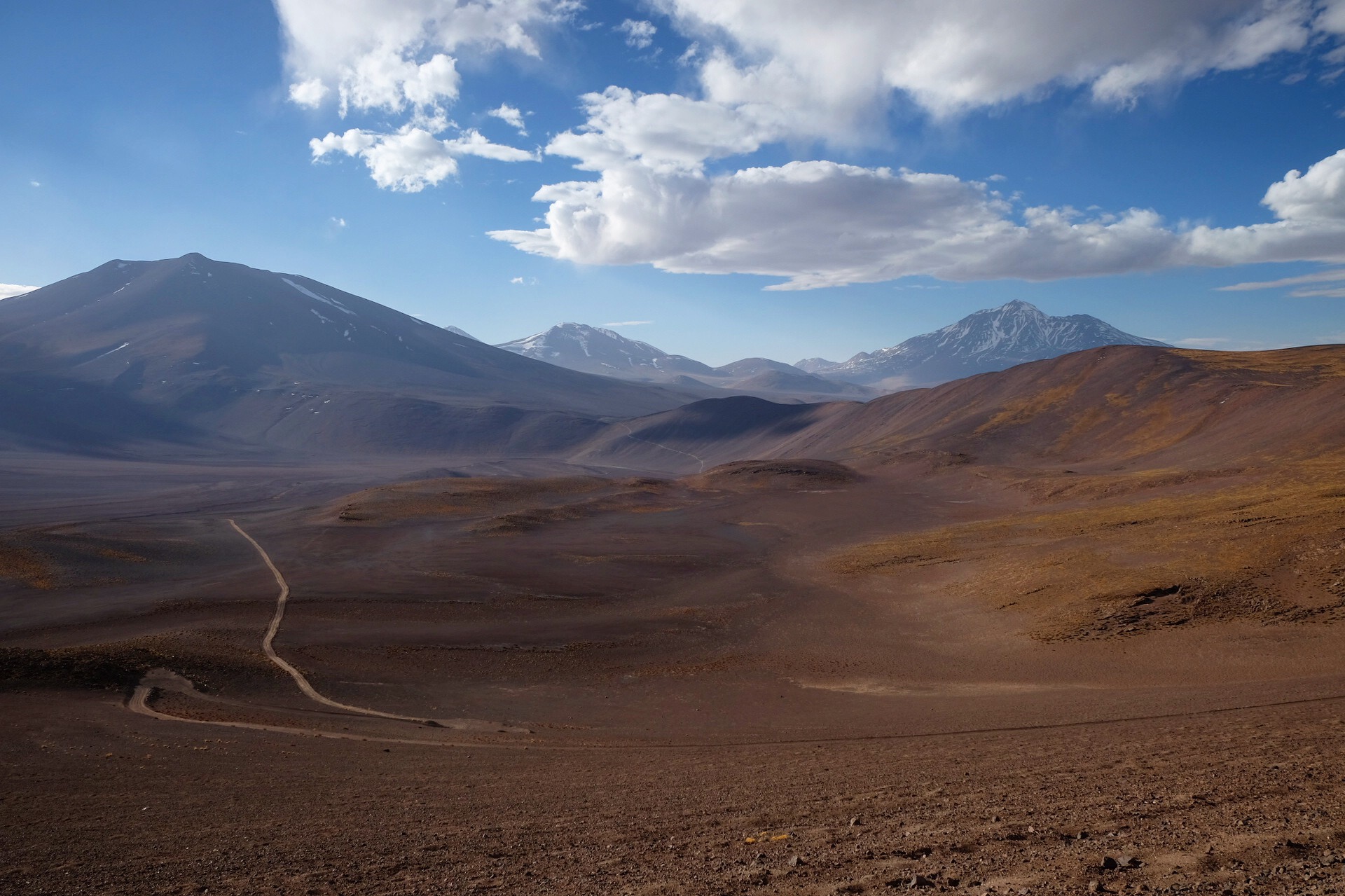 Biscuit bribery to get through the days last climb. Works every time. The views help too. 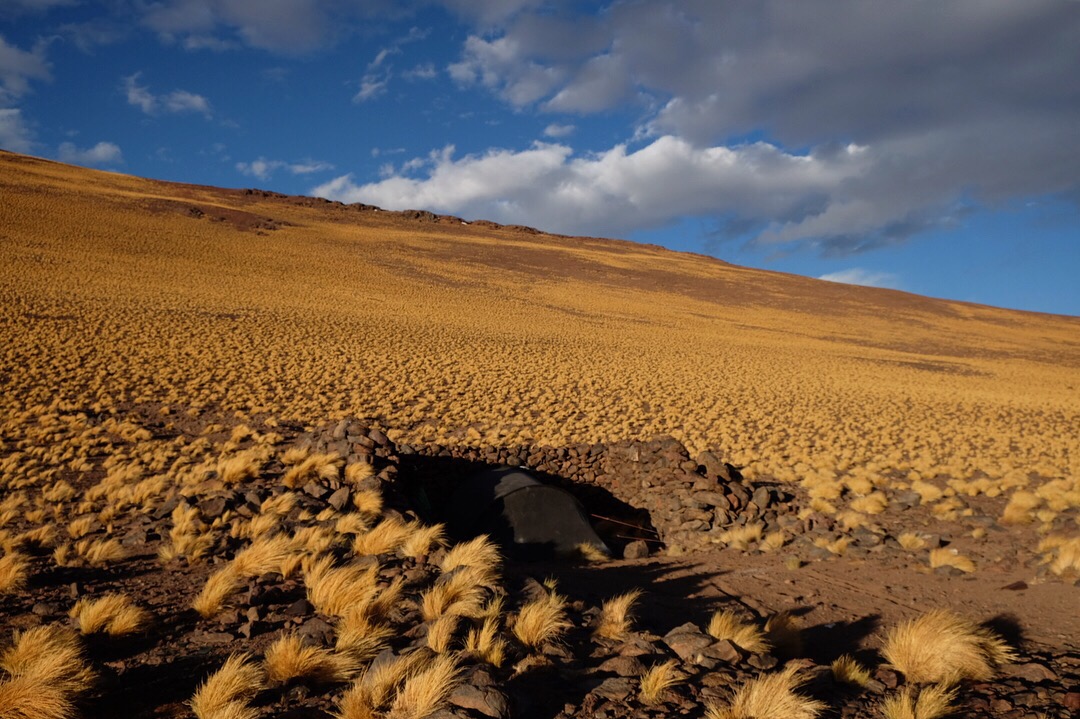 Eileen and a peeping Volcán Socompa 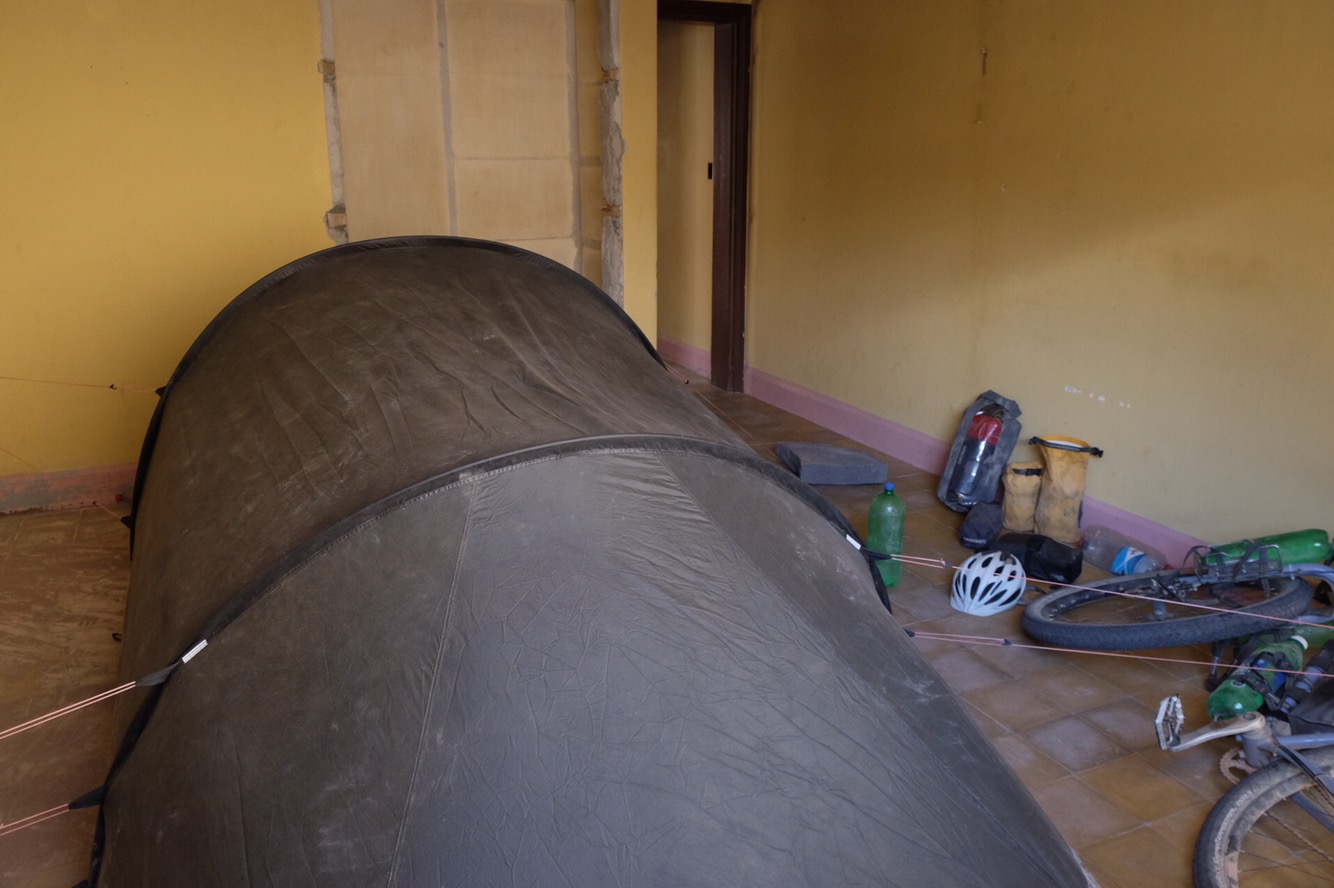 Estación Caipe, shelter for the night

Salt-crusted, crystal clear turquoise pools are refreshing and mesmerising just to look at 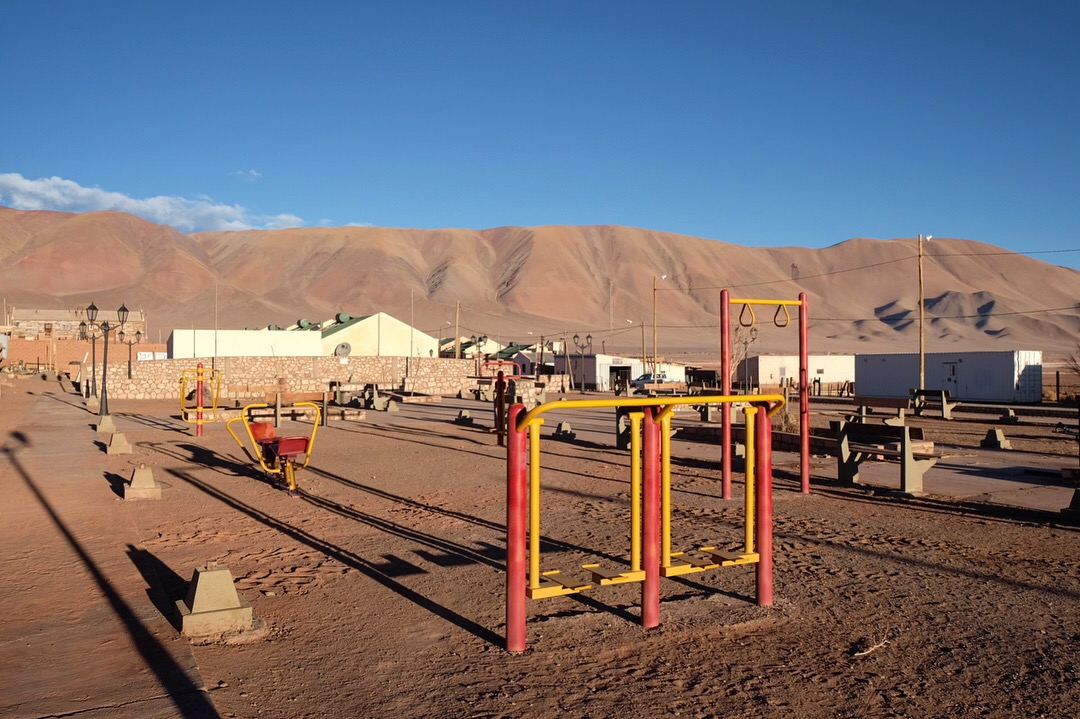 The Chileans are at the border year round, while the Argentines arrive after winter. This year it was the 14th of October. They’d initially told me it would be late October and had agreed to stamp us in in San Antonio de Los Cobres, saving us a trip to Salta. You can check the border statuses on twitter @FronterasMinSeg (they have an app too which is handy) and email the Argentine folk in San Antonio de Los Cobres on esc22-sacobres@gendarmeria.gob.ar if you want to arrange earlier entry.

The info centre, Aduanas and Carabineros in San Pedro all had differing info, if any, about Socompa, so it’s best to go direct to the source. The Carabineros however did call the border post for us.

Peine has 2 or 3 accommodation options near the top of town past the church. The trick will be finding someone. The only thing we could get was a room with bathroom for 25,000 pesos. Others may be cheaper. Shops were very basic, if even open so we’d recommend shopping in San Pedro.

Water: In Chile the pozos and water sources mentioned in some earlier blogs are all dry (a few leaky pipes around but nothing that looked reliable), with the exception of Monturaqui station 23km from the border. This was full but had a recently dead Vicuña floating in it. I’d say this reliably has water though, and is generally maintained as the Chilean Carabineros told us they get their water there.

Water at the border from either the Chileans or Argentines.

Argentine water at Estación Caipe seems reliable, worth asking before leaving the border though. One of the newer station buildings has a tap running in the back room, and the source is up the hill a bit.

Camping: Check out Nathan’s handy list of shelters. (Velo freedom link below) We had some insane wind on the Argentine side. Even if it seems calm in the afternoon your best bet is to find as many walls as possible to cower within. Temperatures never dropped much below zero Celsius at night which was much warmer than we expected.

We also took the tracks for about 12km to Estación Caipe, getting on at 24.760002 S 68.036678 W. A bit soft under tyre, so it’s arguable whether it was faster. If you take either of these, be extremely careful as the train IS running, albeit infrequently. If there’s a howling wind that impairs your hearing it’s probably best to stick to the road.

Tolar Grande has a municipal hostería now charging 150pp/pn (US$8.50). Separate men’s and women’s dorms only. There are lots of homestays, costing at least double that. There are three stores and we were able to find decent supplies.

There’s a bus to Salta via San Antonio on Fridays. The return trip is on Wednesdays.

We relied on and were grateful for the following route notes. Check them out if you’re planning on riding this:

10 thoughts on “The faded glory of Paso Socompa”