We’re standing at the corner, where our direct route to Fiambala branches off the main road, chatting to couple of Argentine gentlemen who are full of questions. A sandy track signposted ‘4×4 only’ leads into a more deserty looking area than the desert we’re already in. ‘Una aventura?’ we offer, uncertainly. There is a sharp intake of breath, ‘¡Duro!’ they exclaim (Hard). Once we manage to satisfy them that we’re not lost, merely a little insane, they stop trying to point us back to the main road and we part ways, with many (too many, I think) wishes of good luck.

We wind our way into the Campo de Piedra Pomez in beautiful conditions, and actually not entirely sure until we arrive that ‘pomez’ is Spanish for pumice. Though we could go further, our past weeks of Puna experience tells us to seize a good camp spot when one is on offer, or risk being caught out, exposed, later. As we’re still debating the merits of various spots, nestled between towering blocks of pumice, the vast plain of sand to the west mingles with the wind and whips up a dense beige cloud. In seconds the air is thick with sand and all we can do is cover our faces, clamp shut our eyes and mouths, and wait for the stinging of tiny bullets to calm down. The afternoon and evening is spent hiding in the tent, listening to the constant static of sand blasting our little shelter and watching it slowly dust everything inside. I suppose this is the price one pays for seeing the sunrise in a pumice field, overlooking a cinder cone in the desert?

‘Are you alright in the head!?’

We’re at the top of the days climb in the afternoon, emptying the sand from our shoes when a large group of guys in an array of big-boys-toys roll onto the pass from the opposite direction. Quad bikes, Can-ams, robust, outback adventure buggy type things. They look incredulous, with a little admiration maybe mixed in with a large dose of pity. I’m quietly relieved we didn’t cross paths five minutes earlier, when I was coaxing my loaded steed through the sand, slowly, and very much on foot. They want group photos, and one guy wants to pose with Andy’s bike so he can show it off to his mates, but the sand and towering height of the seat has him quickly abandoning any attempt at actually riding it. They offer an impressive and tantalising selection of drinks, and we can’t turn down an ice cold beer from one of their chilly bins. Cue another round of photos, cans raised. One guy quizzes me on where we’re going, and how long it will take. He looks at me gravely, seriously – The roads are bad, he says. I tell him I know, feigning nonchalance, but I don’t really have any idea what’s ahead.

Anibal, the nephew of our Antofagasta hostess, is a keen cyclist. We had gotten to chatting about onward routes and he quickly had us convinced to take the more adventurous of our options. I find myself wondering what exactly he had said about it… He may have mentioned pushing through sand, but mostly I just recall him saying it would be a horrifyingly hot 40c down in Belen and I was sold on anything that was not that. The state of this road seemed like it could hardly be as bad.

Oh but the roads are very, very bad. On the descent from the pass we make about 5km over an hour or more, mostly dragging the bikes through deep sand. At times like this it is inadvisable but inevitable that I spend my time extrapolating out these times and distances and calculating that we will make it to Fiambalá roughly when hell freezes over, if we don’t first die of thirst or hunger. Slightly nervous about this realisation we nevertheless call it quits and set up camp in a pathetic excuse for a windbreak. I dread what will surely be an exhausting following day, but we’re quickly back on solid ground (having seemingly slept with said dread only 100m shy of it), and coasting downhill through rapid changes in the landscape. Sand turns to rocks and grasses, wild horses stroll about and we leave behind the Puna for a long and picturesque descent to the tiny pueblo of Las Papas.

Our arrival coincides with that of another large group of Argentine guys in loud and ostentatious joyriding vehicles. Though I get the impression the people of Las Papas must see a few of these groups (we later find out this is a stretch of the Dakar rally) I find the contrast of the simple village and invasion of the city slickers uncomfortable. Maybe we’re in the same category, but it at least feels a bit more subtle to roll in quietly on humble bicycles, under our own steam, a mode of transport almost everyone understands.

The group tell tales of deep river crossings ahead but it turns out to be mostly exaggerated. They’re rideable, all 50 of them, and even pleasantly refreshing at the heat of this lower altitude. Once through the last of them our shoes have a chance to dry out on the long, hot cruise down to Fiambalá

Our stretches of riding naturally fall into sections of five or so days, followed by a break to restock, plan and rest. Fiambala’s hot climate, backyard vineyards and ice cream shop are quite the contrast to its dusty, desert counterparts on the Puna and, as much as as I enjoyed them, this makes for a more inviting spot to hole up and indulge.

Sneaking off early from Pascuala’s casa in Antofagasta

Lakes, volcanoes and lava fields make for a stunning ride out of town

Roadside shrines are everywhere in Argentina. Offerings range from bottles of water and booze to… old car tyres? 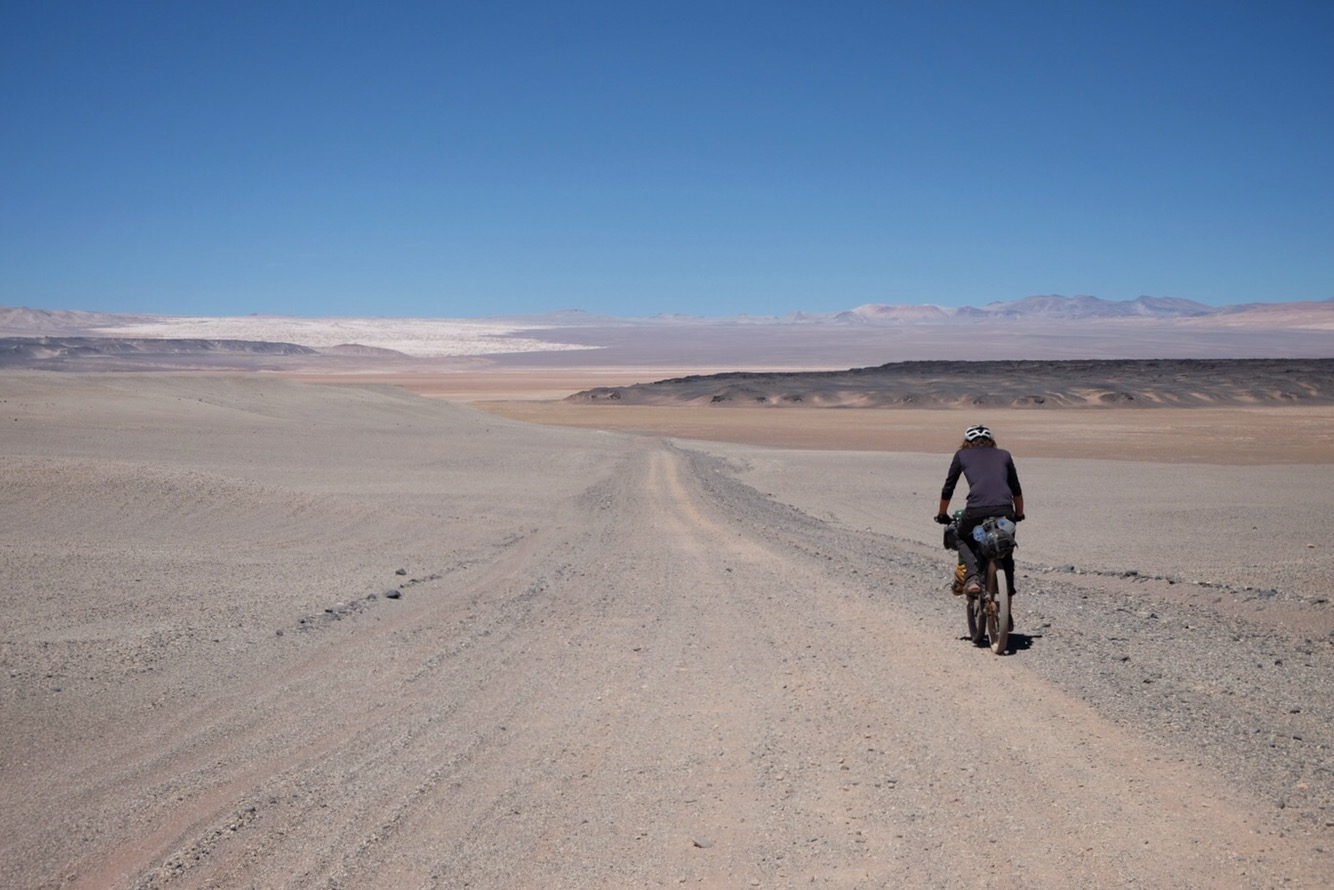 Heading off the main drag and back onto dirt. Lava flows, a pumice field and a whole lotta sand up ahead 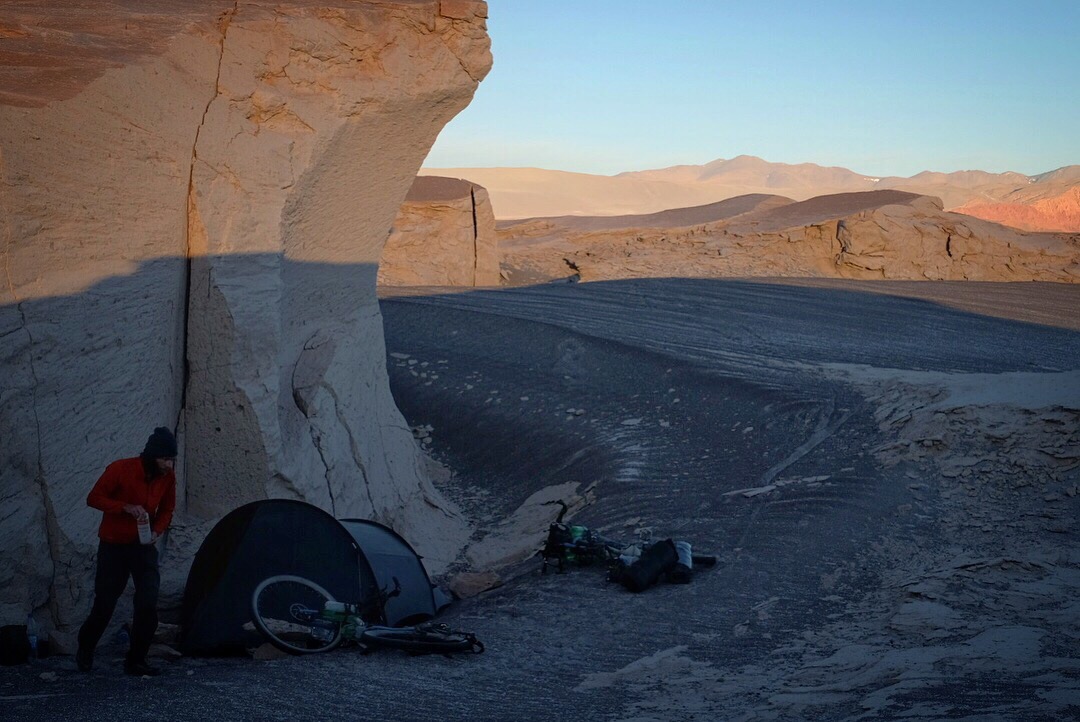 Camping in the pumice field was a spot to remember. Whatever chaos the previous day ended in, mornings are always calm and serene. 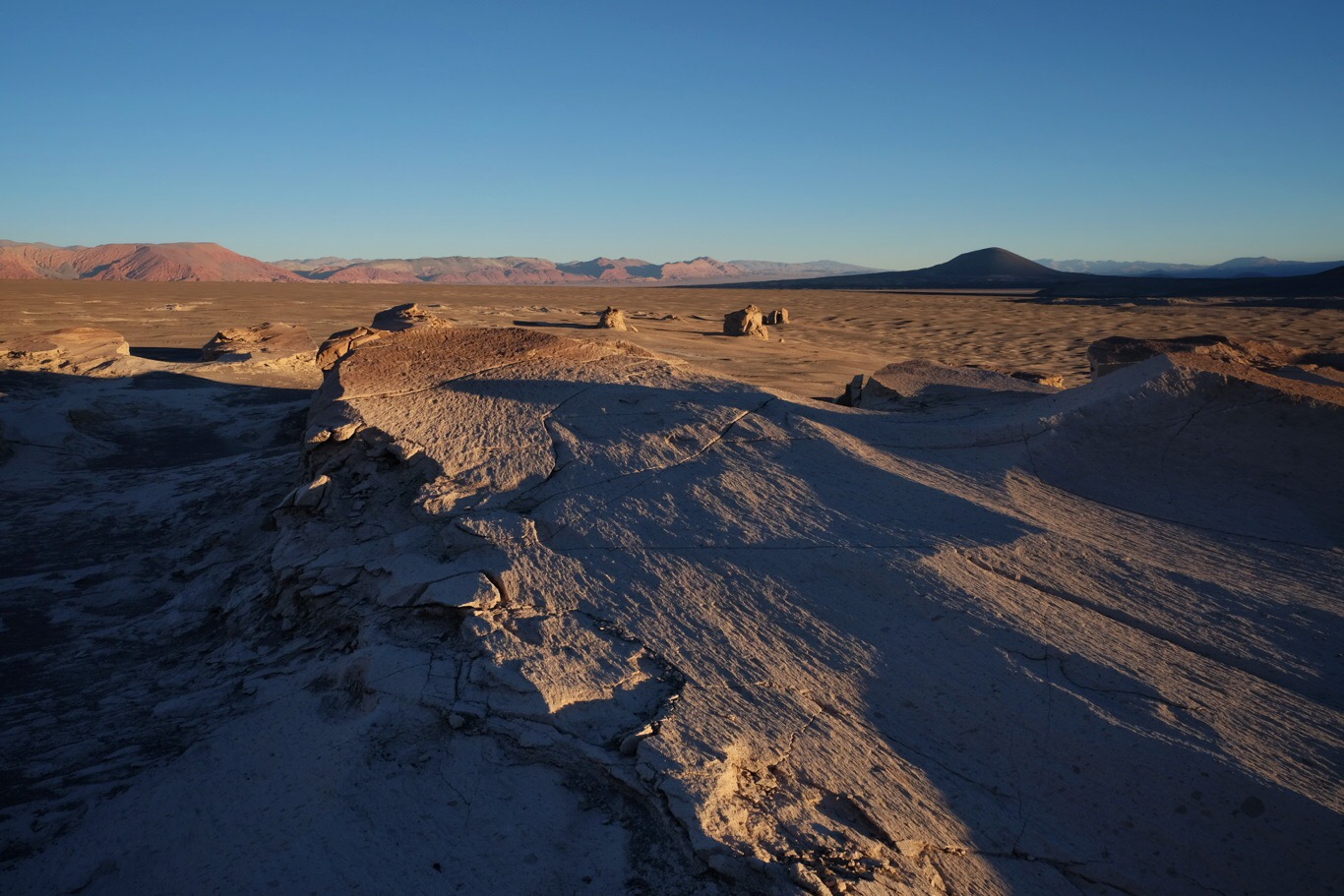 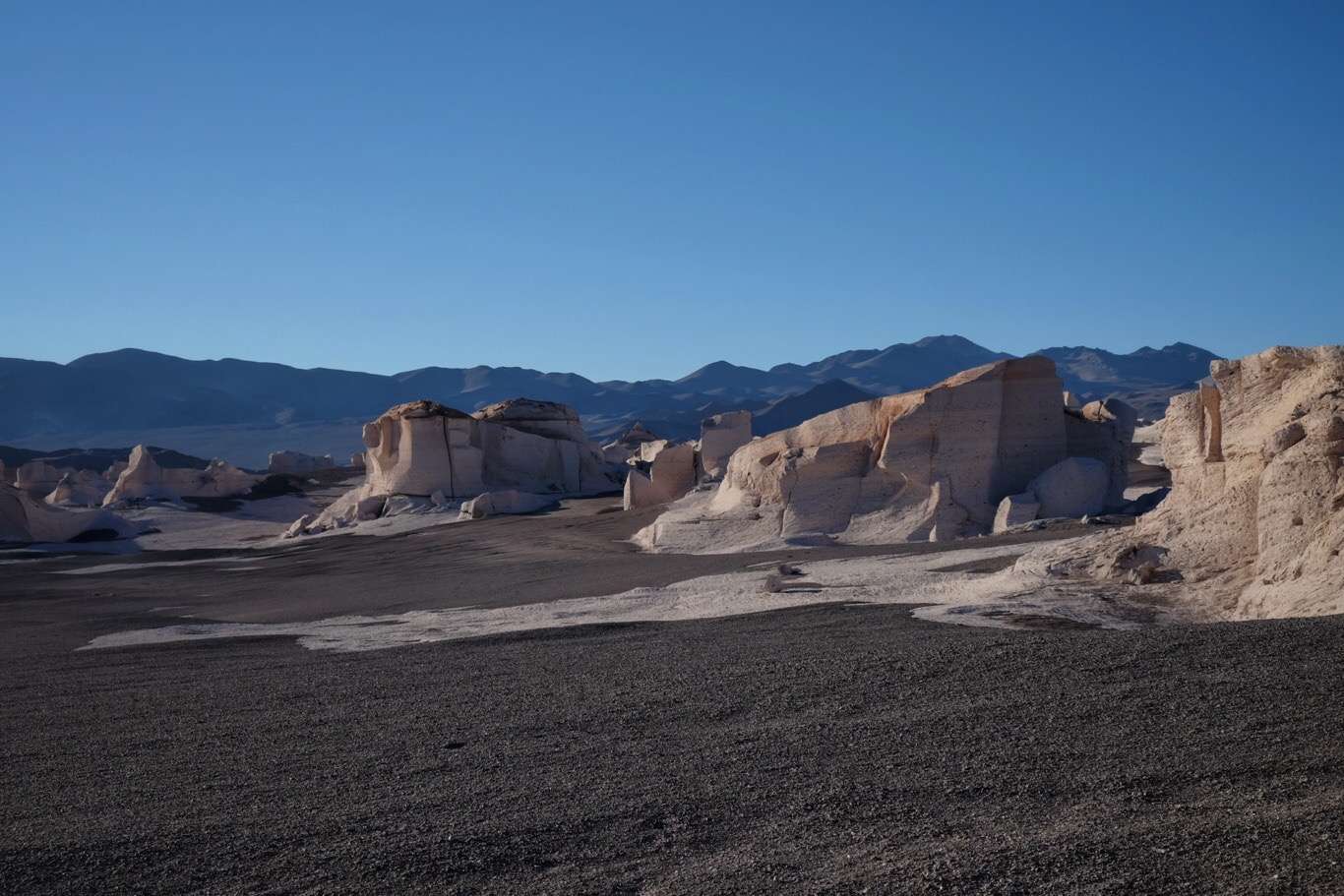 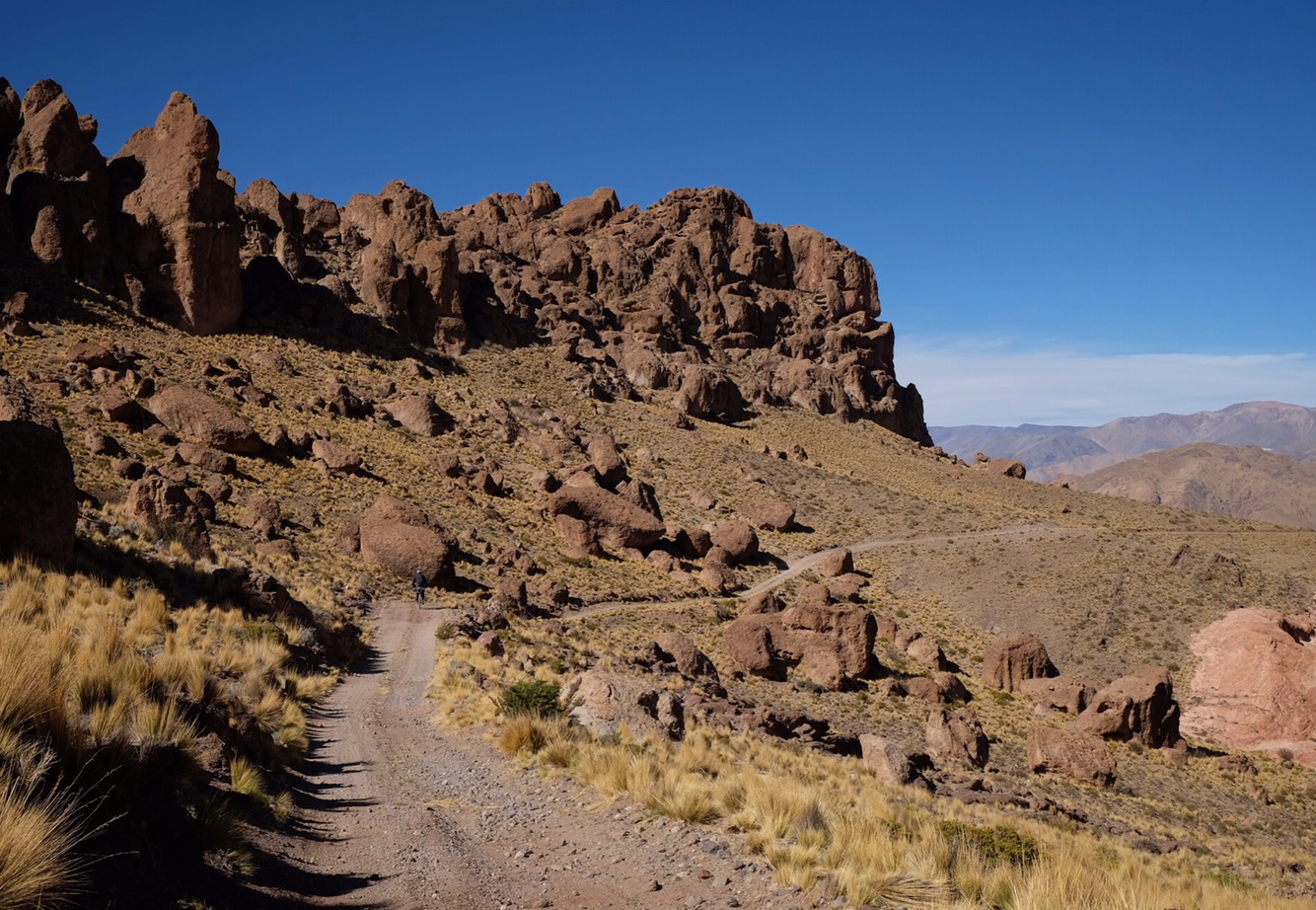 Descending from the Puna brings a complete change of scenery from the past few weeks. This seemed lush in contrast and alive with birds and plant smells that we didn’t realise had been missing for so long until we were reacquainted with them 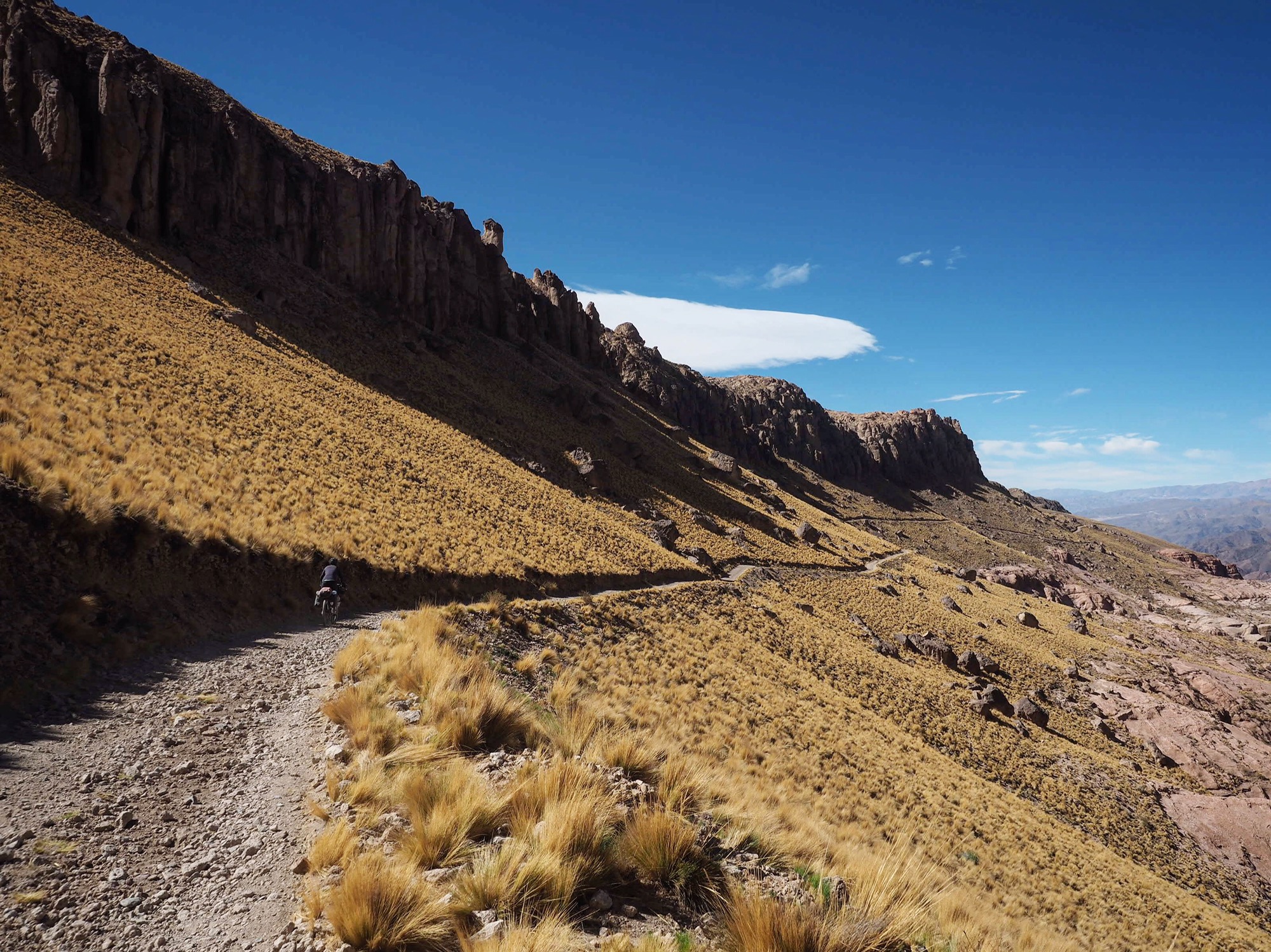 Sublime road etched into the hillside

Dropping down towards the river valley on the right

Road and river sharing the lane

Try to camp in the pumice field (~km78) for wind protection, and ’cause it’s awesome. To the west is an expanse of sand which will whip up into a sandstorm if the prevailing easterly is on cue.

The first 5ish km of descent are some kind of sandy hell. Don’t worry, it gets better. We camped at the end of this in a sad excuse for shelter but better camping can be had around km120

The downhill after the sandy part is all pretty rideable, with occasional sandy patches or sections that are loose and rocky.

At km142.7 is the friendly pueblo of Las Papas. For us this was 2.5 days of riding. You can restock water here. There is a very (very) basic kiosk and the possibility of a bed (no official accommodation but we were told it was possible) and maybe dinner from the comedor.

River crossings are plentiful after this point but we found them to be rideable and below the knee. Notably though there was no recent rain, it could rise quickly.

At km189 is the town of Palo Blanco, the first place where you’ll find good shops, likely accommodation. Smooth sailing from here to…

Fiambala! Icecream! Beer! Etc! If you’ve never been to a Grido Heladería, you’re in for a treat. San Pedro Hostel has nice common areas. El Paraíso camping is basic but the owners and garden are nice. Plaza wifi is ok during siesta time.

The termas 15km east of town into the mountains are really lovely, as is the campground there (cold little pools to splash about, grills, picnic tables). Bring food. Camping was 80pp / Termas 100pp.

Traffic: some cars between Antofagasta and the Pumice fields. After this we saw a few big groups of Argentine guys on motorbikes, 4 wheelers, and adventure buggy things, then more on the main stretch to Fiambala.