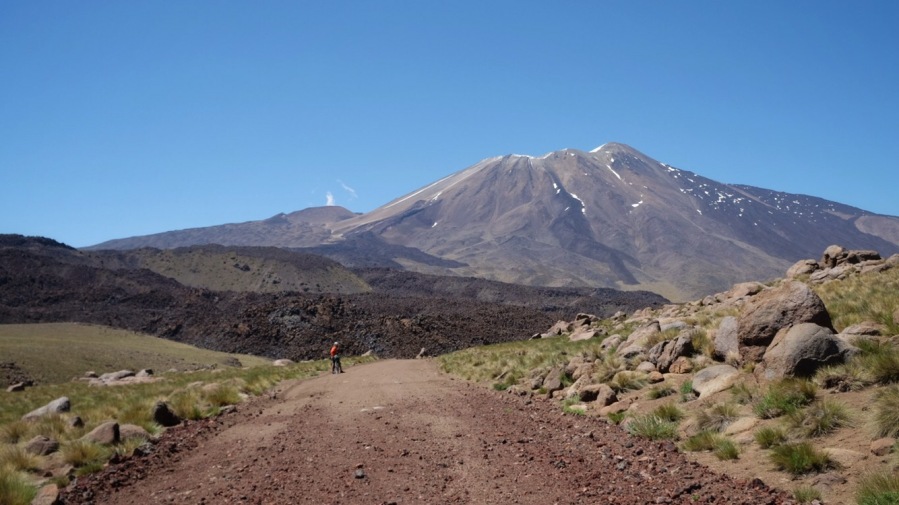 Mendoza felt like a milestone of sorts: Half way-ish down Argentina. Except when we got there I looked at the map properly and realised it was more like a third. This is a seriously large and long country.

We have long known that this next stretch of riding would be testing in ways we had not yet encountered. My reading suggested that the road south take a turn for the worse, apparently becoming hot, flat and boring. There seemed to be little to recommend it. If cyclists are inclined to skip a section of their South American jaunt, this is often first in line to get axed.

In some perverse way though, we were looking forward to the experience. Celebrating the single kink in the road in 100km, getting lost deep in our podcasts and in contemplation. Part of a longer journey is finding enjoyment in the mediocre sections – Seeing the landscapes become greener, discovering the quirks of a new province, appreciating the vastness of Argentina. Just add some camping, asados, wine and Argentines and most things become rather palatable. And so we barbecued and pedalled and drank wine and pedalled and sweated and pedalled and all in all it was a pretty fun time.

We’re still in fairly untouristy places, which always makes for more interesting interactions. People pull over for no real reason, just to say hello, comment on the state of the road and wish us a good trip. It’s developed, but not impersonal. It helps that Argentines are rugby players too. All of a sudden New Zealand triggers admiration rather than blank stares or knowing nods of ‘ah, yes, Holanda…’. Now it’s ‘ah, yes, All Blacks! Jonah Lomu! Very strong!’ Thanks Jonah.

The sections off the Ruta 40 and further from towns are, for the most part, very peaceful. Having eyed up moving southwards on the Chilean side we’re pretty convinced this was the quieter option. If nothing else, one can at the very least appreciate the extremely efficient line southwards that this route cuts.

In Chos Malal we’re foiled again by closed passes, bookending our Argentine stint with visits to various Gendarmería stations who once again give us differing information. It seems Argentina will just not let us leave. Frustratingly, Paso Pichachen and Copahue become number 4 and 5 of passes we wanted to ride but have been closed. Time for a hastily made new plan.

Leaving Mendoza on a road running parallel to the highway, we’re kept in the shade of trees and on occasional surprise bike paths for 40km.

An uninspiring blast for another 40 on the 40. It’s here that I realised all the podcasts I thought I’d downloaded for my sanity did not actually download. Imagine the horror of realising I was alone with my thoughts in the Pampas.

One of the loveliest campgrounds to date in Tunuyun, complete with an enormous swimming pool and cute sheltered tables. 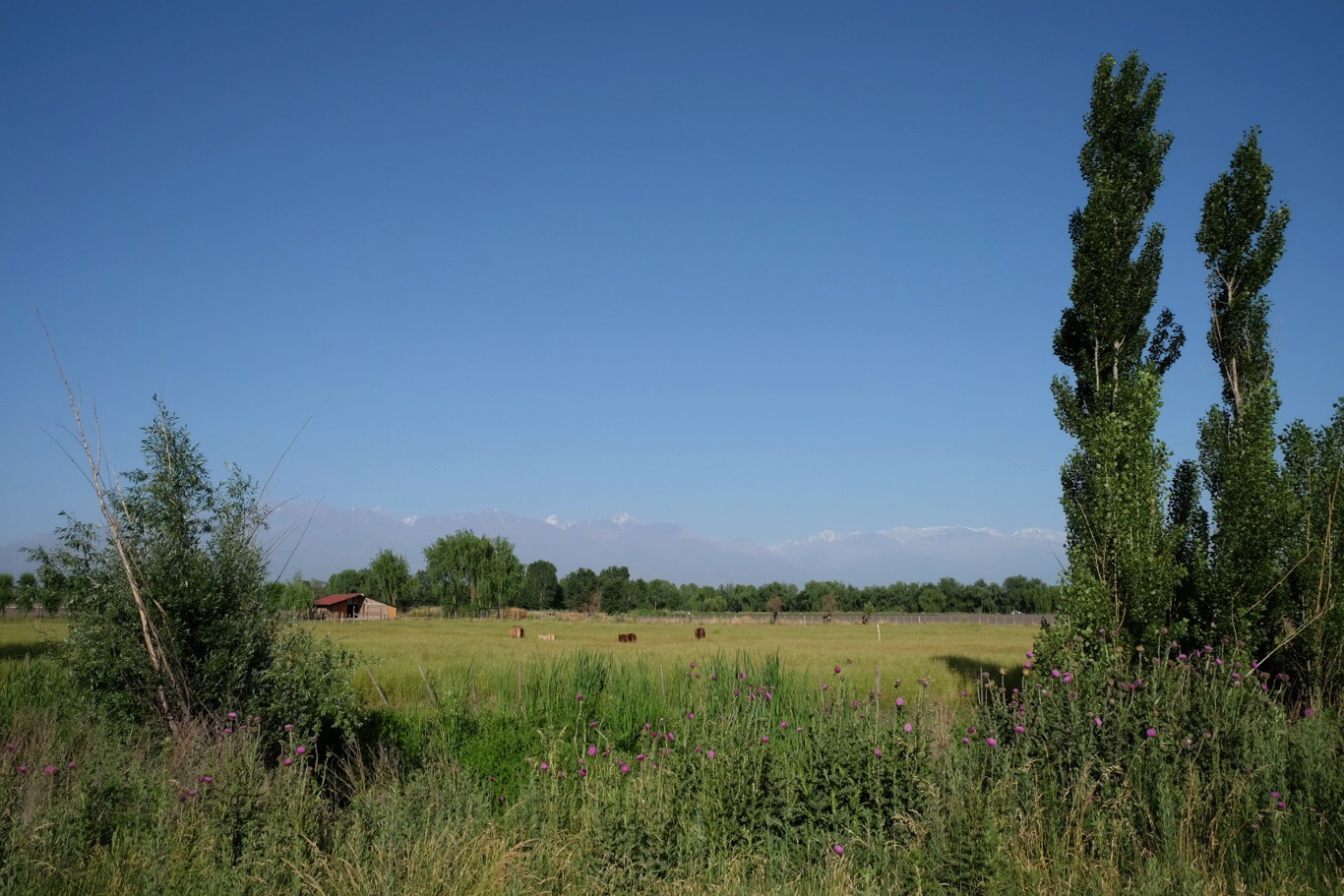 Hitting the dirt and sand of the old Ruta 40 towards El Sosneado. There are 3 route options here, this being closest to the mountains although they remain in the distance. This road at least has a few more corners and crinkly bits on the map.

The surface is rubbish for much of it, bad roads that seem to take without giving and at some points have you wondering why you insist on taking these back roads. But it has some nice moments and offers peaceful camping. 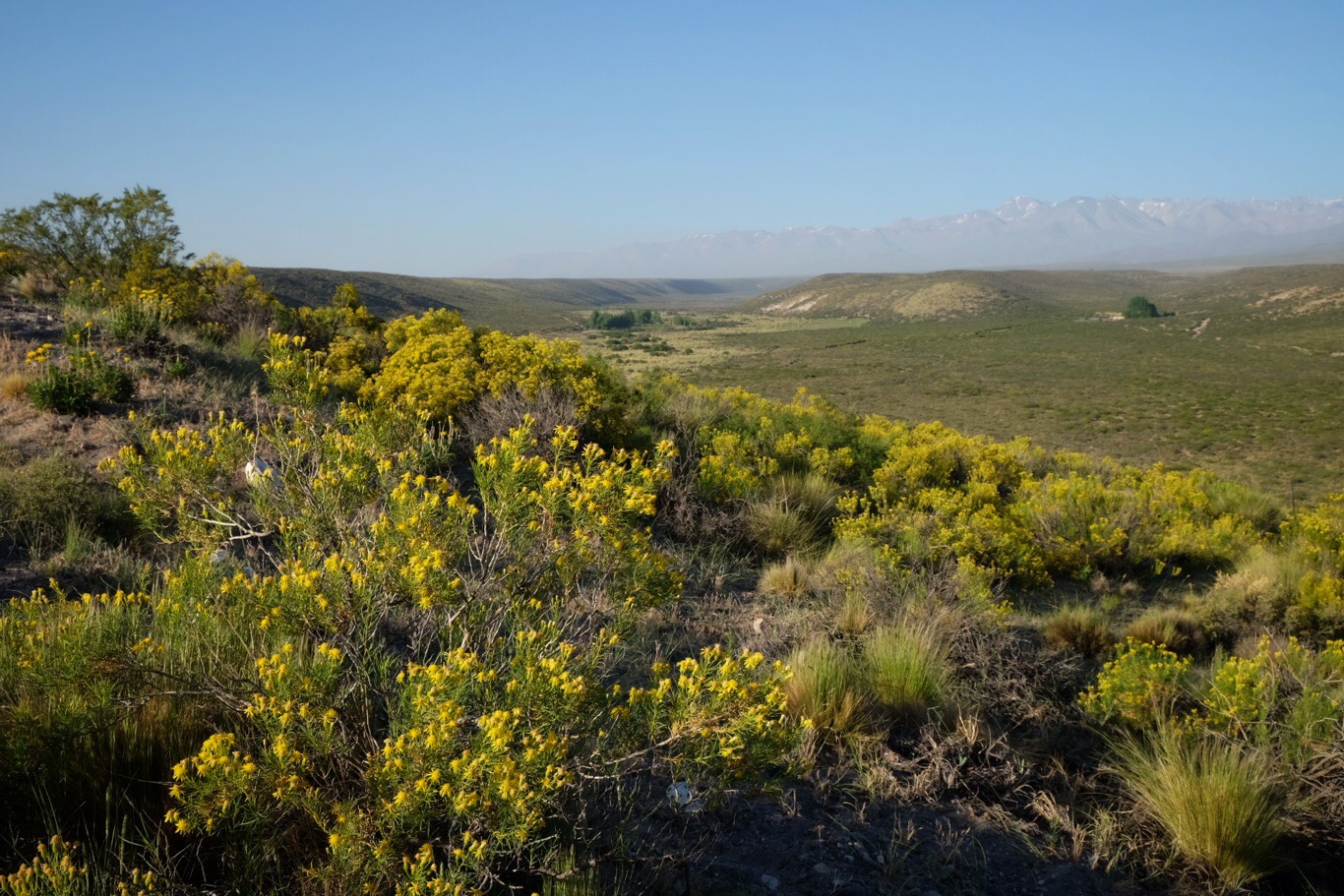 Missing those mountains in the background 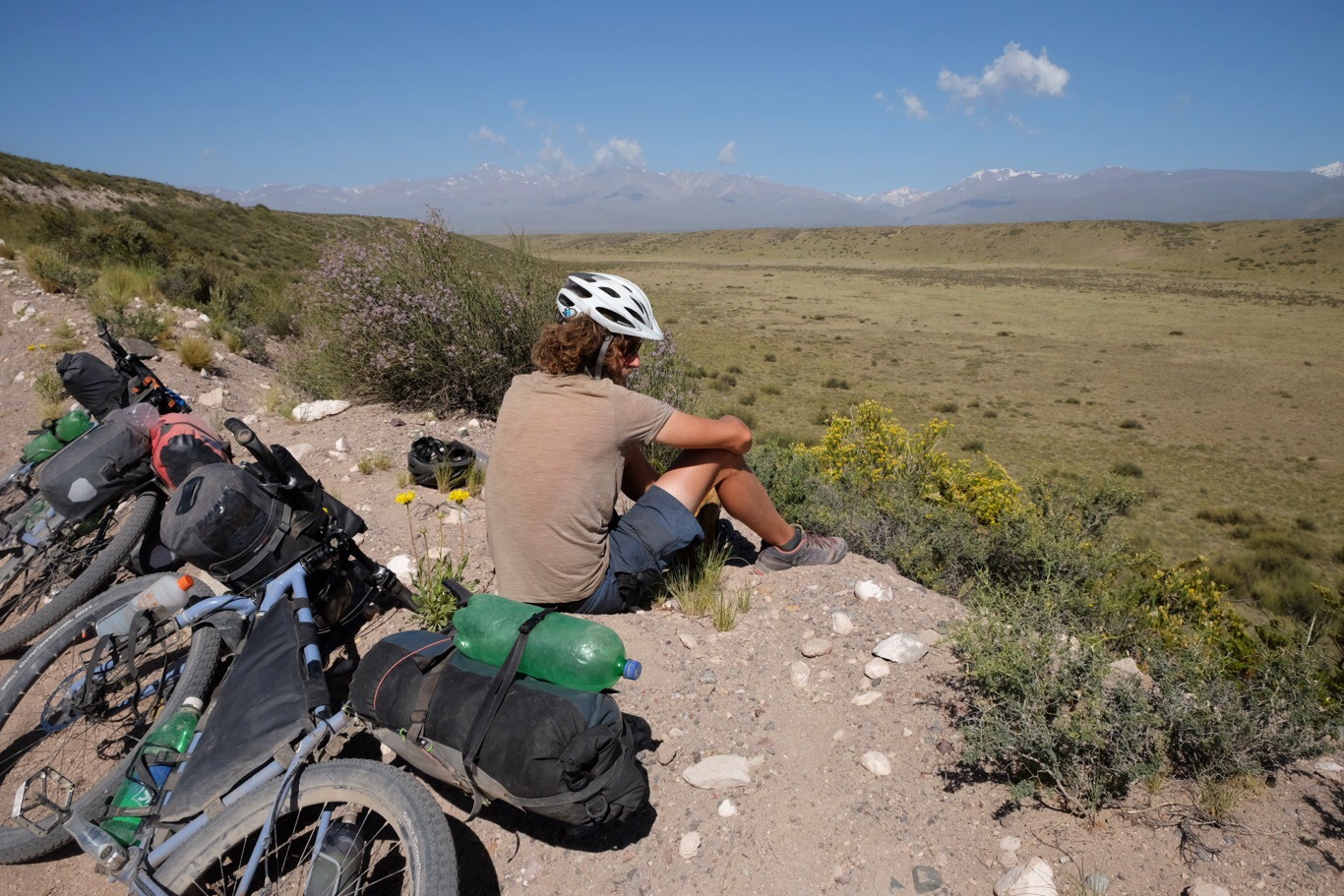 First or second morning tea. Who can remember when there are so many meals in a day? 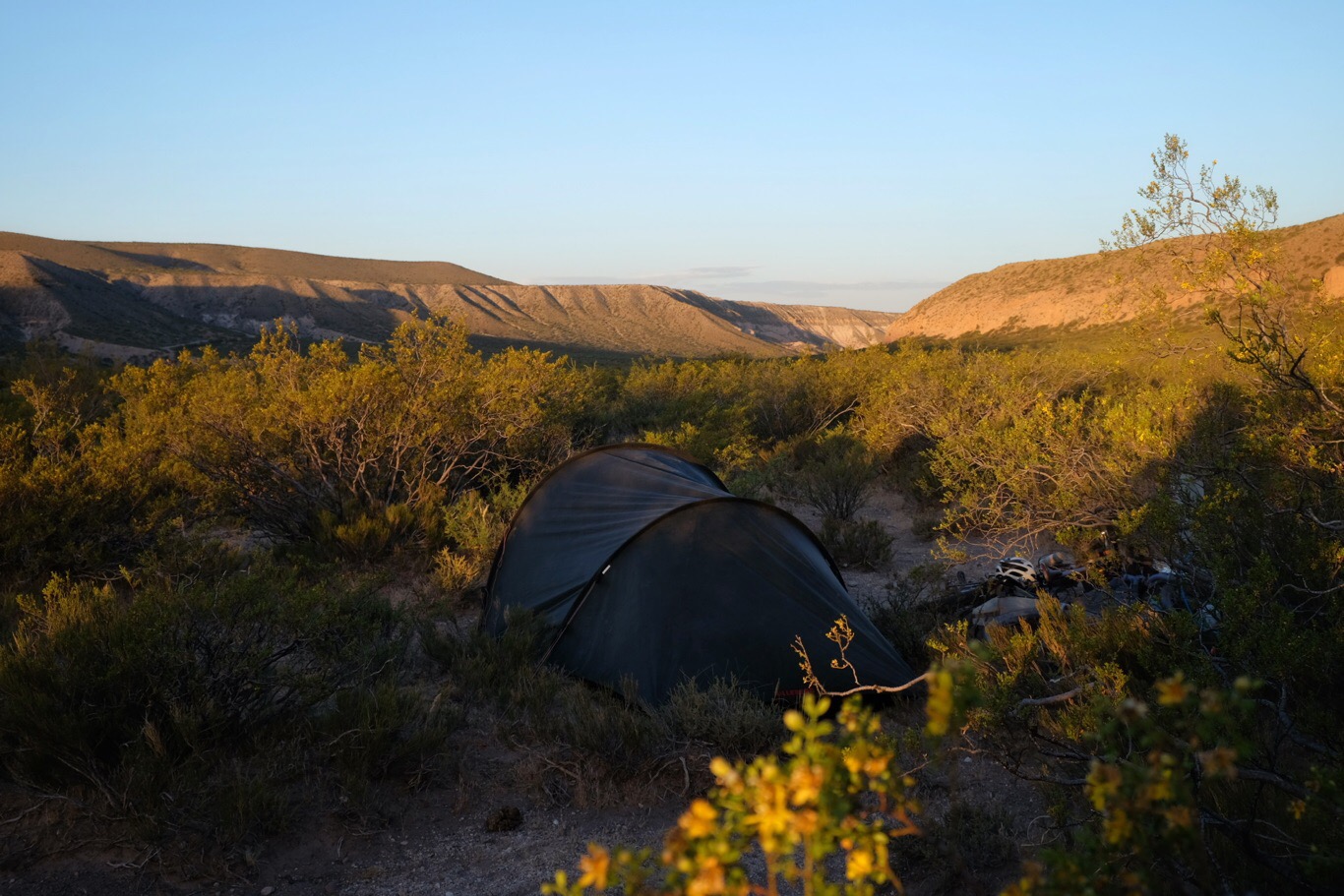 More stealth camping, luckily it’s not hard when there’s almost no one around

In Malargue we spend a few nights at the trusty municipal campground. It’s particularly good and cheap, and the town grows on us once we find the good empanadas and bakery. 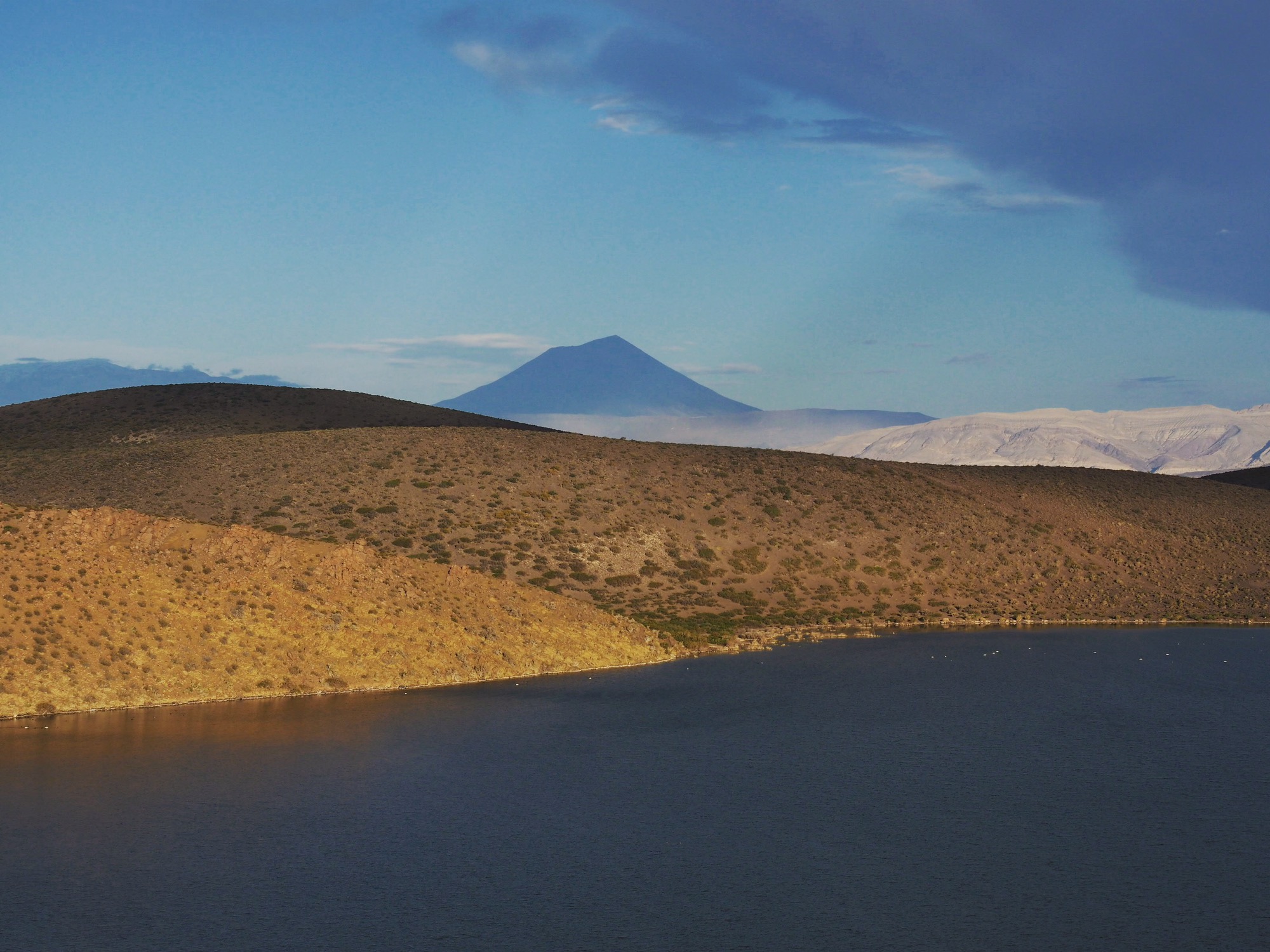 We eek out a tent platform on a rather steep hillside plunging down to Laguna Nueva so that we can spend the evening with this view. 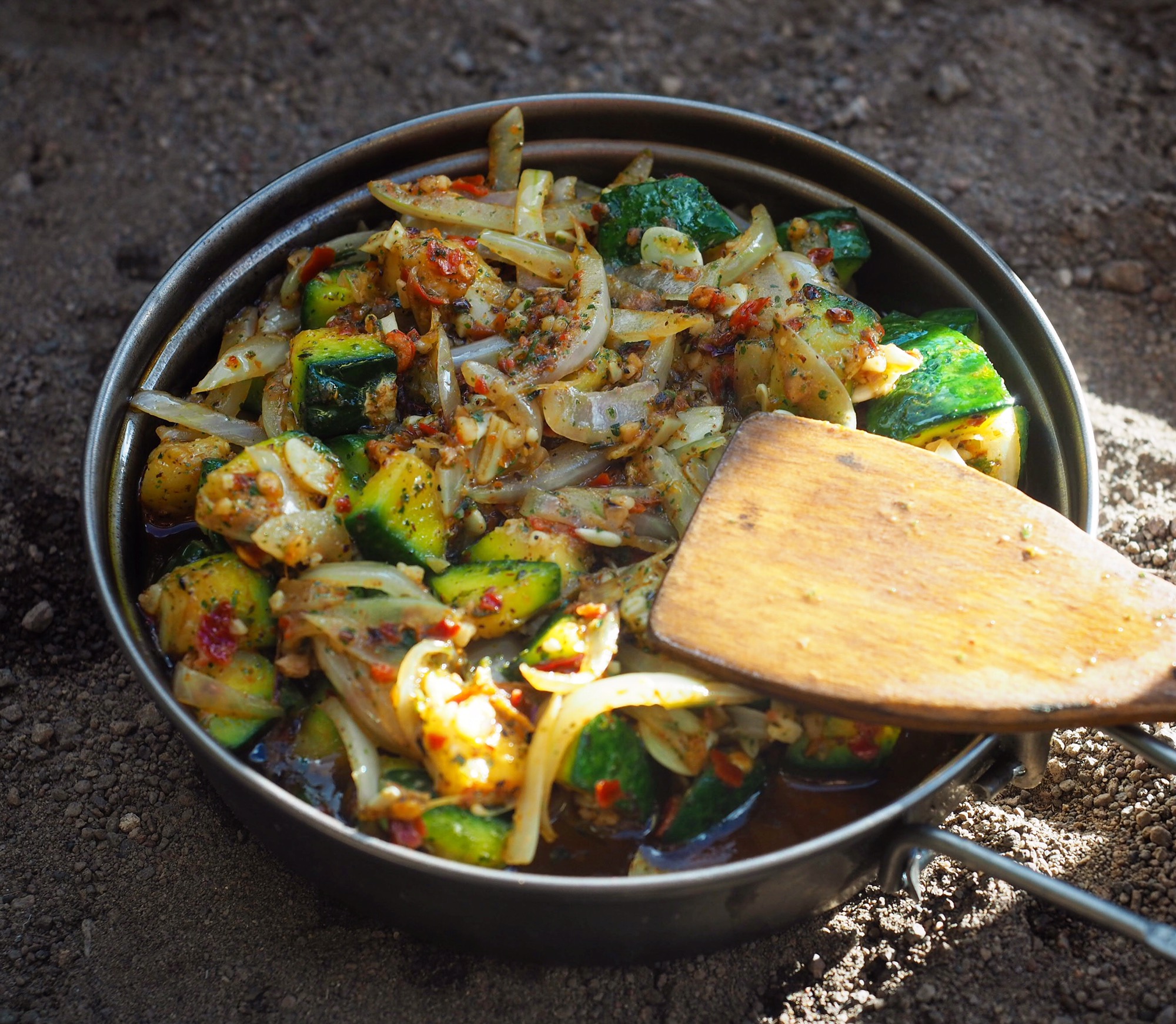 On Andy’s birthday we’d hoped to find something birthday-worthy in Barrancas, but were left a bit disappointed. We did however pick up a nice bottle of wine and some facturas (pastries), and kept pedalling into the hills for a while. Birthday dinner is the usual vege pasta thing.

A dirt road connecting Barrancas to Chos Malal via Parque Tromen is a highlight of this stretch of riding – good roads, zero traffic except a couple of gauchos on their horses, and the imposing Volcán Tromen.

The degrees crank up as we roll down to the nice little town of Chos Malal where we discover the atrocious Argentine excuse for pizza, almost faint at the inflated prices of Neuquén province (we’ve officially arrived in Patagonia, which extends much further north in Argentina than Chile), crash with our first Warmshowers host and muddle through another conundrum of closed passes.

This is a pretty straightforward route and you only really need to take extra care with water on the old Ruta 40 section between Pareditas and El Sosneado. Andes by bike has this section covered. Some decent surface, some pretty bad, but we never had to push. El Sosneado has a small shop but it was obscenely overpriced.

Malargüe’s municipal campground had wifi, super hot showers and was immaculately kept. Only 50 pesos for the tent made it a cheap place to have a day off. La Díez, a little football themed resto bar in town has well priced tasty food and fantastic empanadas.

You can get supplies in Tunuyán, Pareditas, Malargüe and Barrancas.